Pace guns upstage each other

VICTORIAN pace pair James Pattinson and Peter Siddle destroyed NSW in the Sheffield Shield final – and now might be marching in lockstep towards the Ashes , writes RON REED:

NOTHING, of course, should be allowed to dilute the applause for the wonderful story of day two of the Sheffield Shield final, old warhorse Peter Siddle’s starring role in the demolition of NSW for a paltry 121, guaranteeing Victoria will collect its fifth title in six years.

But for most of the afternoon, the real talking point was James Pattinson’s intimidating presence.

Pattinson will still be the centre of  considerable attention for the hugely anticipated coming months in England – Siddle may or may not. The veteran Victorian does deserve to be, but there are so many good fast bowlers, some in form and some dealing with injuries, with their hands up at the moment, he might just be one unlucky victim of the squeeze.

Pattinson won’t be, and that’s entirely fair enough since most of his career has been hostage to ill-fortune, definable as a series of bodily malfunctions that have consigned him to more dead time doing rehab than furthering the Test success he was born to enjoy.

He was on fire at the Junction Oval, bowling with fierce pace and challenging movement in the air and off the pitch, dismissing three top-order batsmen, Nick Larkin, Jason Sangha and Peter Nevill, to finish with 3-30 off 10 overs.

He was unlucky it wasn’t more, but the Sydneysiders must be sick of the sight of him given he took 5-25 against them just a couple of weeks ago.

And just by the way – and this is far from meaningless in the ferocity of the competition for baggy green caps among at least seven or eight fast bowlers  – the in-form NSW attack couldn’t get him out, either, his undefeated 23  off 96 balls confirming that, like the Test incumbent he closely resembles, Pat Cummins, he has genuine claims to all-rounder status – almost.

It is not widely known that when Pattinson first represented Victoria at under-age level he was a specialist opening batsman. A year later, he played again – this time as a fast bowler.

That was his true calling, of course, but he still bats well enough to make hundreds at club and state second eleven levels, and that is an extremely valuable string to his bow.

Pattinson should now be an automatic selection for the Ashes tour, and chatting to commentator Ian Healy during a break in play there is definitely a school of thought that he could be valuable in the World Cup too.

Siddle’s status in this complex selection riddle is ambiguous.

At 34, there is a perception that he might be slightly less threatening than his rivals – most of whom are five or six years younger – which is why the Victorian selectors agonised over whether or not to play him this weekend.

When they did, they went the whole hog, captain Travis Dean unexpectedly giving him first over with the new ball, to which he responded by claiming the first wicket, and continuing to bowl superbly – perhaps even with more pace than usual, occasionally  – to finish with 5-28 off 14 overs, more than anyone else bowled.

It was wonderful to watch and the crowd fully appreciated the significance. At the risk of saying the same thing two days running, Siddle’s loyal service to Victorian cricket – and his indefatigable and ever-smiling attitude – demanded that he play. It would have been a travesty, if not an insult, if he had not.

He said his last five-for in Australia was so long ago he had forgotten it – it was against South Australia four years ago —  but he is confident it constitutes proof positive that he still has much to offer, especially in England where he has a strong record.

Naturally, he desperately wants to make the Ashes tour, admitting he has a point to prove after having been left to warm the bench in all but the final Test four years ago.

Depending on how that pans out he will return to county cricket with Essex, having had a  blinder last year – “the best I have had in any form of cricket” – which led to a recall to Test cricket against Pakistan in the Middle East in October, and an opportunity to add to his 200-plus wickets at the top level.

“You have to pick players who are ready-made for their conditions because they are different and last year gave me plenty of confidence,” he said.

The ideal scenario would be to be partnered again with his Dandenong club team-mate Pattinson, which, he says, is not as silly as it might sound.

“We both enjoy bowling together and it shows on the field. We have a lot of fun. The success we have spurs us both on. Whether its me building pressure by dotting them up or him scaring them with pace and swing, whatever, we complement each other very well,” he said.

“We would be a good pair there later in the year.”

Nobody who was at the Junction Oval – the shell-shocked NSW batting line-up certainly no exception – would have any serious argument with that.

RON REED has spent more than 50 years as a sportswriter or sports editor, mainly at The Herald and Herald Sun. He has covered just about every sport a... END_OF_DOCUMENT_TOKEN_TO_BE_REPLACED

RON REED has spent more than 50 years as a sportswriter or sports editor, mainly at The Herald and Herald Sun. He has covered just about every sport a... END_OF_DOCUMENT_TOKEN_TO_BE_REPLACED

ARE THE Demons genuine contenders for a top finish in 2018? GEOFF HARRIS reviews the season ahead and tips a top two finish for the long-suffering Demons fans. END_OF_DOCUMENT_TOKEN_TO_BE_REPLACED 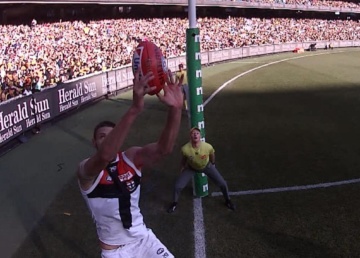 VIDEO reviews were meant to take the critical errors out of football, cricket and soccer, but PAUL GOUGH reckons they fail to fulfil that function and are a blight on the games. END_OF_DOCUMENT_TOKEN_TO_BE_REPLACED