Doc Baldock still stands out in a crowd

SPORTS FANS don’t know what they are missing when Tassie turns on its carnivals of bikes, sprinters and choppers. ROD NICHOLSON reports from the Apple Isle:

A STATUE of legendary footballer Darrel Baldock stands in front of the main gate at the Latrobe recreational ground. The sole St Kilda premiership skipper of 1966 greets all comers, just as he did when he played and coached four premierships at this ground.

He also departed here at a state funeral in February 2011, where more than 3,500 admirers turned up in the sleepy central coast town in Tasmania that boasts a permanent population of 4,169.

However, we are not here today to indulge in The Doc’s three passions – football, racing and politics – but to witness the 121st annual sports carnival featuring cycling, athletics and woodchopping.

Unlike a century ago when sports carnivals captured the public imagination and lured tens of thousands of spectators, only a couple of hundred spread themselves comfortably within the grandstands or outside the bar. And judging by the average age of the spectators, as opposed to competitors, thankfully Jimmy Sharman’s boxing tent is no longer part of the program.

The youth of today simply don’t know what they are missing.

Welsford, 21, is the new star of cycling. He is a gold medal prospect at the coming Commonwealth Games on the Gold Coast. He is an entertainer, and a superior athlete, and evokes memories of the legendary Sid Paterson.

He went to Launceston the following day and won the Wheel Race at the Silverdome, breaking two minutes for the 2000m in breath-taking style. He later won at Burnie, and all up won from 1000m to 8000m in a truly dominant display.

The cycling is world class. Welsford has competition from Institute of Sport teammates Nick Yallouris, Kellard O’Brien and Cam Scott, as well as rivals from seven other nations.

The women also prepared for the Games with road and track races. Multiple world champion Amy Cure lapped the field in all three criteriums at Ulverstone, Devonport and Burnie, is heading to the Games, as most likely is Macey Stewart.

On this day the main women’s event, the 2000m race, went to comeback kid Lauren Perry. She is a story in herself. The 21-year-old only recently returned to competitive cycling after 18 months in limbo, stricken by various viruses which led to chronic fatigue syndrome that enforced an eight-month halt to her promising career.

After joining Welsford to win the world’s first mixed Madison in Launceston the following night, Perry was stricken with an appendix ailment en route to Devonport the following day. That enforced a sudden end to her return.

Cycling is a tough caper. Macey Stewart was hurled from her bike at Ulverstone on Boxing Day during a criterium, but bounced back to finish second in the next race two days later – bandaged like a mummy to protect the gravel injuries.

Another major cycling hope, Russell Gill, endured a couple of days to forget. He was stranded at Adelaide airport when his flight was cancelled, only to arrive with eight minutes to spare before the opening criterium. He promptly crashed, broke his shoulder and punctured a lung and spent the night at Burnie hospital. He has returned to Adelaide, but now is highly unlikely to be part of the Herald Sun Tour.

The athletics may not have enjoyed the same depth as the cycling, but the appearance of Hale was all that mattered. He was brilliant when winning his heat, semi and final with explosive speed. So impressive, in fact, that he was dragged behind scratch for the next meeting at Burnie, narrowly missing out in the heat but then winning the Invitation dash. He will represent Australia at the Games as he is the nation’s fastest sprinter without doubt.

Intermingled with the cycling and athletics was outstanding woodchopping – world championship woodchopping.

There was no mistaking the imposing figure with the microphone – Tasmania’s axeman of axemen, David Foster. He remains the biggest man in the sport.

To the surprise (and disappointment) of many, New Zealander Jack Jordan won the men’s 300mm Underhand World Championship, edging out his Victorian opponents, Glenn Gillam and the reigning champion Lawrence O’Toole.

Gillam went on to win a world title at another discipline at Burnie.

As we said farewell to “The Doc” after a full day of entertainment, there was a feeling of nostalgia, a genuine hankering for the “good old days” when watching sport of all sorts was a carefree, cheap and cherished way of life.

ROD NICHOLSON is one of Australia’s best-known sports journalists. He reported cricket, football, racing and other sports for 47 years for The Herald ... END_OF_DOCUMENT_TOKEN_TO_BE_REPLACED

ROD NICHOLSON is one of Australia’s best-known sports journalists. He reported cricket, football, racing and other sports for 47 years for The Herald ... END_OF_DOCUMENT_TOKEN_TO_BE_REPLACED 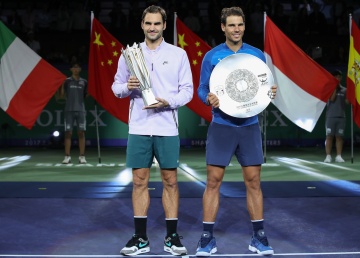 THE WORLD tennis rankings can often seem totally bewildering to most fans. MARK HARDING takes a look at the two top men and provides the reasons why Roger should be Number One: IF ever there was an example of why the world ranking system in tennis needs an ove... END_OF_DOCUMENT_TOKEN_TO_BE_REPLACED

THE Big Bash is losing followers at a rapid rate that must be worrying our cricket chiefs. GRAHAM BICKNELL explains why he is disenchanted. END_OF_DOCUMENT_TOKEN_TO_BE_REPLACED