A terrible sequel to a Tigers premiership

The news shook the whole football world. A VFL premiership captain murdered in his own home, in front of his wife and son. GREG HOBBS takes us back to the drought-breaking Richmond premiership of 1967 and the tragedy that later struck its leader:

IT IS 50 YEARS since Richmond famously won its long overdue premiership in 1967. If you were a schoolboy at the time you are probably retired by now. That’s how much water has since flowed under the Swan Street bridge.

Fred Swift was the captain and oldest player in that great premiership side. Sadly, Fred’s hard country limbs that had waged many a battle against the best full-forwards in the land didn’t make old bones. By 1983 he was dead at 44. Sadder still, murdered in his own home near Bendigo in the presence of his family.

Swift was the hero of the narrow nine-point Grand Final win over Geelong. It was a thriller right to the end and if field umpire Peter Sheales had not allowed “old” Fred a controversial mark in the dying moments the premiership silverware could have headed down the highway.

Swift, playing the last of his 146 games, saved the day for Richmond. Sixteen years later he had no hope of saving his own life when two young thugs gunned him down in his Lockwood farmhouse, 10km south-west of Bendigo.

The intruders, armed with a .22 calibre rifle and disguised in balaclavas, broke into the Swift home, tied up Fred’s wife, Anita, and son, Paul, and began ransacking the house. When Fred arrived home around midday he was confronted by the pair and shot in the heart and thigh.

The offenders made a quick getaway in Swift’s car, but were captured later in the day. Fred Swift hadn’t stood a chance.

The football world mourned. The Tiger leader, made Mayor of Richmond for a day and who proudly wore the mayoral robes to celebrate the premiership, was now again in the headlines; different headlines that gutted everyone at Punt Road

The intruders were jailed and while this was some consolation for Swift’s family and the legion of fans who had grown to love the tough, familiar old full-back, it didn’t bring him back.

Number 15 was gone forever. If he had lived he would be 80 next year.

Fred Swift did live long enough to celebrate four more Tiger premierships from afar. Those won in 1969, 1973, 1974 and 1980 when Fred had long since departed the VFL scene. Not long after the Grand Final defeat of 1982 he was murdered.

News of his death swept through the football world like a bushfire and immediately revived the heroics he performed at Richmond several years earlier. The 1967 premiership was special because it was a drought-breaker. The club’s first since 1943 – a long, long wait of 24 years, but still not as bad as the frustrating wait (since 1980) by the current Richmond army.

Fred Swift had toiled long and hard for his day of ultimate MCG September glory. He played his first game in 1958 and experienced the rotten seasons at Punt Road, not making the finals until his 10th and last season. There was no prettier sight for Tiger fans than Swift, with the premiership cup held aloft to the packed MCG stands, standing beside the losing captain, Graham “Polly” Farmer.

Geelong attacked fiercely in the closing stages and there was an almighty roar when Cats rover Bill Goggin’s running drop kick was marked on the goal-line by Swift. But, was it a goal? Had the ball travelled over the line? It was controversial, and opinions raged. But, the Swift mark “stood” and so did Richmond’s narrow hold on the game.

At last, Richmond had won. The first flag since Jack Dyer was the captain and coach of the 1943 title team.

While great joy surrounded the 1967 success, sadness surrounded the club’s Number One ruckman, Neville Crowe, who the season before was the captain and the best and fairest winner. Like Swift, he had seen the lacklustre years at Richmond and was crying out for a premiership.

On that momentous occasion in 1967 Crowe was not in the selected 20 chosen to do the job. Instead, he was forced to watch from the grandstand, the result of tribunal suspension from the Second Semi Final. Out for striking Carlton’s burly John Nicholls. Richmond won and instead of Crowe going straight into his first Grand Final he went straight into mothballs – for good!

Much has been said and written about that Crowe suspension and the general belief is that he was not guilty. Nicholls, it was claimed, put on an “act” and Crowe was the victim of an umpiring over-reaction. Crowe would later become president of the club (1987-1993) but, alas, no more finals.

Four other players from the ‘67 line-up have also departed: the champion centreman Bill Barrot (aged 72 in 2106), defender Geoff Strang (aged 59 in 2003), Mike Patterson (aged 61 in 2002) and Alan “Bull” Richardson (aged 74 in 2015). Barrot was a champion and best on ground in the ‘67 Grand Final, Strang was a tough defender, Patterson was a no-nonsense ruckman and Richardson, not quick of foot but a master of handball. His son Matthew Richardson kicked 800 goals for the Tigers and is now a prominent media personality.

Season 1967 was Swift’s only season as captain. He had started his career in the Victorian country with Sandhurst, then came Richmond (plus two games for Victoria), then captain-coach of Corowa, then Morwell and finally Kennington/Strathdale.

GREG HOBBS spent more than 50 years covering all the major sports for Melbourne newspapers. As well as being a formidable newsbreaker, he was a talent... END_OF_DOCUMENT_TOKEN_TO_BE_REPLACED

ShareTweetShare on Google+Pin on PinterestSend with WhatsApp
93 recommended

GREG HOBBS spent more than 50 years covering all the major sports for Melbourne newspapers. As well as being a formidable newsbreaker, he was a talent... END_OF_DOCUMENT_TOKEN_TO_BE_REPLACED

One thought on “A terrible sequel to a Tigers premiership” 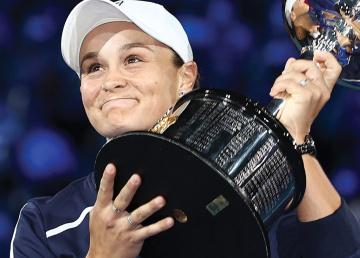 SEVEN DAYS IN SPORT:  IT’S been one of the best stories in Australian sporting history for a simple reason – it was all good, writes RON REED. END_OF_DOCUMENT_TOKEN_TO_BE_REPLACED