Keep your eyes on the squid

Looking a squid in the eye at close range can be a big, inky mistake as STEVE COOPER reveals:

Late autumn and winter has not been kind to Port Phillip Bay anglers. King George whiting have been patchy, the winter snapper run failed, and although there are schools of salmon moving about, these can be hit and miss. Of the popular bay species, the standout over the past couple of months has been calamari squid. Not only are they plentiful and of good size, but reports have come from most areas around the bay.

Squid rank in the top two or three sought after bay species. Take a peek in any bay angler’s tackle box and amid the snapper and whiting paraphernalia you will nearly always find at least a couple of squid jigs.

It wasn’t always this way. Squid wasn’t a popular seafood in the 1960s and 70s when the only people who wanted to eat them were Italian, Greek and Spanish migrants. Most squid were caught from piers, usually under lights at night, and baited jigs were the go.

Squid fishing has come in from the cold and been legitimised to a standing of being regarded as a worthwhile pursuit. And why not? After all, squidding is fun, but not without its hazards. Like that day off Clifton Springs when I was leaning over the side of the boat guiding in a squid. I was holding my rod in my left hand, and guiding a squid in towards me so I could reach down and grab it around the neck with my right hand. The squid was facing me; I thought it had exhausted its ink, but I was wrong. I reached down, looked the squid in the eye and it looked back. Not liking what it saw, the squid opened up its tentacles and let fly.

I yelled, “Duck!” to warn my fishing partner, Terry Hayden. Actually, I didn’t say duck, but the sanitised version sounds better. There was nothing I could do. The black ink splashed over me, across the back of Terry’s prized Gortex jacket and on to the boat console. Some ink even splashed on to the foredeck.

Just when you think a squid has expended all of its ink and is safe to take hold and bring inboard, one tricky bugger always finds an extra dollop, and then lets fly. Black, smelly goo is a hazard of squid fishing. That period as you reach over to grab the squid is the intangible. Until you take hold and can control the direction the squid is facing, there is always a chance of being inked.

For a creature that is a shellfish, squid have an enormous following. Squidding is a growth industry, one clearly reflected by the razzle-dazzle of jigs hanging on tackle shop walls. When it comes to variations in colour and size, squid jigs come in a mind-boggling array of options with prices that start at about $4 for the el cheapos, through to $40 jigs aimed at, well … I’m not that gullible.

Every year the wheel is being reinvented as some new, you beaut squid jig is heavily promoted by tackle shops on the Internet: “So and so was fishing the inshore weed beds using (jig name and colour) and caught his bag limit. We have the new range in stock ….” It’s the cyberspace lure aimed at attracting dollars from anglers, which I guess is what selling is all about.

Mind you, squid jigs do work differently. A good jig will swim correctly without side-to-side wobbles. It will dip or dive with a smooth, even action when you stop retrieving. Even then, there are jigs that perform better than others on a given day. It isn’t so much brand or supposed design secrets as colour, size and presentation that are responsible.

Seen from a distance, squid look like shadowy creatures and yet, I can never recall seeing a shadow cast by a squid. I’ve asked a few diver mates about this and they say the same.

Squid are slick movers: graceful creatures perfectly adapted to a watery environment through which they don’t so much swim as glide, and move forward or backward as effortlessly as they hover. Ever alert and always a hunter, squid are often found lurking over seagrasses or kelp. With tentacles closed together and tapering to a point, these creatures take on the shape of a geologist’s pick. This attitude can change in an instant: seeing prey, a squid sneaks up on its intended victim, and using its two longer tentacles, grasps the small fish. It then retracts its tentacles, which brings the fish in towards the centre of the circle of eight arms where the parrot-like beak is located.

In water, squid are magnificent. Lift a squid out of the water and it becomes a limp sack of ink. Tentacles that a few minutes before were long, straight and grasping at a jig, dangle uselessly. Even though the soft-fleshed creature attempts to move its flaps as you hold it, there is little change: sometimes a slight wave. In life, squid use chromatophores in their skin to change colour and match their surrounds; in death, squid change colour and the light brown mottling that exists when you land one fades away into white in the main body, to translucent along the thinner musculature of the flaps.

Most anglers work prawn style jigs. These came into vogue in the 1980s with the introduction of Yo-Zuri brands jigs. The name has stuck; many anglers still refer to imitation jigs as Yo-Zuris.

Prawn jigs are sized to an industry standard that is a slight extension of the old Imperial measure. Jigs range from 2.5 inches to 4 in. (50mm to 150mm). Well, that’s the official size. When you measure the jigs, you’ll find they are a squid beak longer, which reflects an industry measure unknown anywhere else in the world.

Colour and size is a suck and see equation; it is not an exercise in matching the hatch. As if the buyer isn’t confused, spare a thought for the squid. Here they are swimming about in temperate waters when suddenly they are faced with psychedelic coloured, tropical prawn look-alikes. Some days small jigs work better than bigger jigs. Always take a variety of colours as well as this can be a major factor in terms of results.

Presentation comes in different ways. From the shore, the jig is cast and retrieved with a stop-start pull, remembering that the depth of retrieve is adjusted by the amount of time the jig is allowed to sink. When it is being retrieved, the head of the jig will dip slightly at the end of each pull. The Japanese use extreme techniques, twirling their rods and retrieving their jigs in an erratic presentation.

In a boat, it is easy enough to drift over holding areas like seagrass beds. If the drift is slow then work the jig as you would from shore. When the drift is fast, you can sometimes leave the rod in the holder and watch. Squid will also take jigs suspended under a float, especially when fishing for another species like whiting using a berley trail.

An alternative to the prawn jig, bait jigs often work much better in cloudy water. A bait jig consists of a 200mm long x 4mm diameter shaft with a set of pins set in a circumference at one end. The shaft is threaded through a fish fillet or pilchard and the jig retrieved the same as a prawn jig, the bait though gives the angler the added advantage of the scent of the bait. Even anglers who refuse to use the old-fashioned bait jigs often tie a piece of fish to a line and allow it to trail behind the boat, some even use a berley trail to raise the squid from their lairs in the kelp and seagrass.

Most squid attack jigs from the side, wrapping their tentacles around it before trying to draw it in for the kill. When this happens, the angler strikes and the pins sink home. If you don’t strike, the chances are you will miss plenty of squid.  Once hooked there aren’t too many that get away. There is no fight as such, just a steady pull. 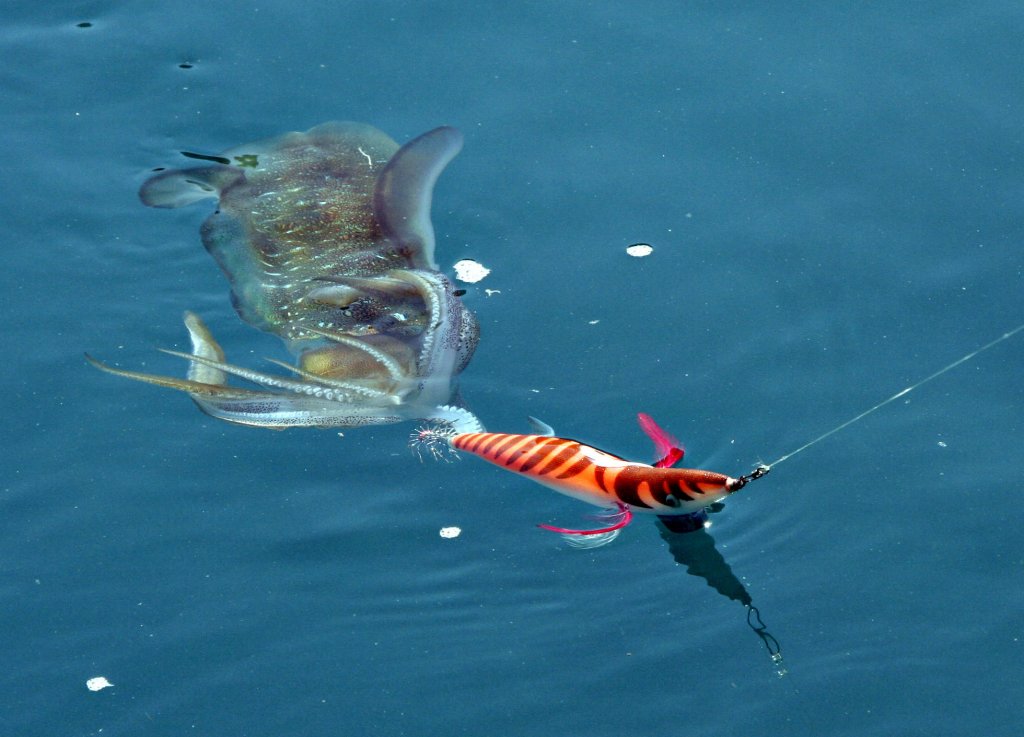 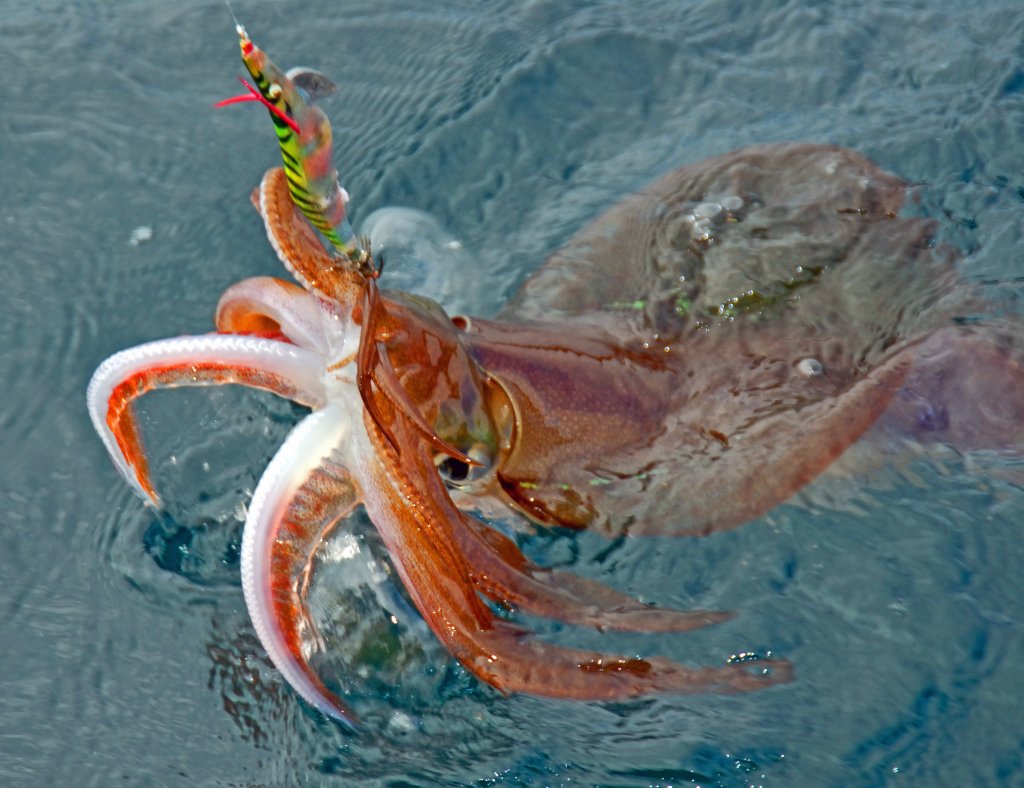 One of the contradictions of catching squid can be experienced by taking a stroll along a pier at night, one where anglers are working jigs under lights. Remember: there is no fight, just a steady pull, and yet … chances are you will happen across what appears to be a struggle of Titanic proportions: Man versus squid. The air is often marked by testosterone-fuelled grunts, backed up by words that should not be uttered in polite conversation, as the one-sided battle between angler and sluggish squid on the end of his line unfolds.

STEVE COOPER won two Walkley Awards for investigative journalism but his great love is fishing and he is renowned as one of Australia’s foremost write... END_OF_DOCUMENT_TOKEN_TO_BE_REPLACED

ShareTweetShare on Google+Pin on PinterestSend with WhatsApp
85 recommended

STEVE COOPER won two Walkley Awards for investigative journalism but his great love is fishing and he is renowned as one of Australia’s foremost write... END_OF_DOCUMENT_TOKEN_TO_BE_REPLACED 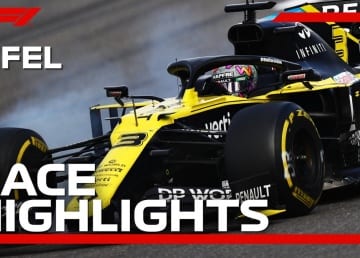 BACK on the podium at last, Daniel Ricciardo shares the Grand Prix glory with the unbeatable Lewis Hamilton, writes PETER COSTER. END_OF_DOCUMENT_TOKEN_TO_BE_REPLACED

THE World Cup drew fans from all around the world, including a father and son from Geelong. JOHN CRAVEN tells what it was really like to be there in Russia. END_OF_DOCUMENT_TOKEN_TO_BE_REPLACED