The trick that everyone missed

IT TOOK Sportshounds writer and part-time leg spinner KEN PIESSE 54 years to achieve his hat-trick dream… and at the time no-one knew it:

SPORTSMEN love to dream. Whether it’s doing a Jack Nicklaus and storming home in the US Masters, or making 100s on consecutive days in a Boxing Day Test a la Justin Langer, we all wish for a supreme sporting moment… one to tell the grandkids.

It wasn’t until my 50th birthday when I finally conceded my dream of representing Australia was over. Bert Ironmonger was 50-something when he played his last Test. He was the oldest ever. By years.

But he was a top-notcher. I was purely club standard. Nigel Murch still talks about the time Steve Waugh whacked my high-flung leggies for 32 in an over, one not-to-be-forgotten afternoon at Royal Ascot. “I’ve never seen anything like this before,” he kept saying from short cover. It was like a tennis match: 646466. The first only just cleared mid-on. The rest were out of the screws.

To survive at any level, I realised I’d have to learn some change-ups, some variations. Maybe a slider. And once or twice in my roller-coasting journey at Port Melbourne, and beyond, I found myself on a hat-trick — without ever getting close to achieving one.

The opportunity in ’99 to spend a week with Warnie’s coach Terry Jenner and assist on his autobiography was a Godsend. We became really good mates and one Frankston pre-season, when I was struggling to dismiss even our elderly practice captain, I emailed Terry and asked him for some advice.

Maybe I didn’t have enough energy at the crease. Maybe  I wasn’t following through fully. What would he suggest?

Within 24 hours came the reply.

“Master,” he said, “have you thought about retiring!”

This summer, my 54th as a club cricketer, I’m still playing, albeit well down the grades.

Last weekend our Australian Cricket Society Over 60s lads were playing at McDonald Oval, Black Rock, where it had all started for me in 1964, at the age of nine.

My old Port Melbourne captain Phil O’Meara graciously allowed me to bowl with the wind. I’m now too old and too slow to bowl into it and with the sixth ball of my fourth over, Richmond’s ever-young Eane Whitten top-edged an attempted wrong-un straight to point.

Over 60s cricket rarely sees anyone bowling more than a four-over spell and when the opportunity came for me to bowl again, 40 or so minutes later, I got lucky again when a fella immediately danced at me, missed and was bowled. The ball basically grubbed, hitting the very bottom of middle stump.

The next man flicked his first ball, which bounced more, straight to backward square leg and Graham Cudden accepted the catch with both hands — a nice take to his right. None of us thought too much about it all. But after being thrashed the previous Sunday, I was happy. I had a third wicket for not many runs. As we gathered, someone from the sidelines yelled out: “It’s a hat-trick!”

Like Merv Hughes, in Perth a generation earlier, none of us had any idea that a third wicket had fallen in three balls.

I reckoned I’d been on a hat-trick seven or eight times over the journey without ever once coming close to taking one.

Now I had one, convoluted like Merv’s, spread over two overs and with a 40-minute gap between spells. How sweet it was! No wonder most of us want to play forever.

KEN PIESSE has covered cricket and football for more than 30 years in Melbourne. He has written, edited and published more than 70 sports books. Signe... END_OF_DOCUMENT_TOKEN_TO_BE_REPLACED

KEN PIESSE has covered cricket and football for more than 30 years in Melbourne. He has written, edited and published more than 70 sports books. Signe... END_OF_DOCUMENT_TOKEN_TO_BE_REPLACED 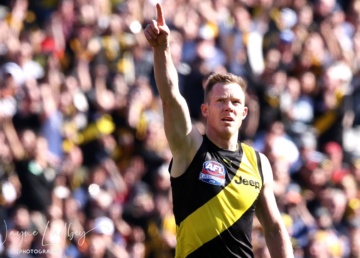 THEY used to be hard to like, the Tigers, but now they’re the best thing footy has going for it, on and off the field, says Chief Writer RON REED. END_OF_DOCUMENT_TOKEN_TO_BE_REPLACED