THE SKY team remains in control after the 15th stage of the Tour but an errant punch has weakened their position. JOHN TREVORROW reports:

JUST when I thought the internal battle in Team Sky could come to a head, an external one has taken over the headlines.

One of Team Sky’s strong support riders, Gianni Moscon, has been disqualified from the Tour after he appeared to punch Fortuneo Samsic rider Elie Gesbert not long after the start of Stage 15 from Millau to Carcassonne.

Although the vision doesn’t really show if contact was made, Moscon has been in lots of strife over the past 12 months and it’s really a case of strike three and you’re out. Even his Sky team principal, Sir Dave Brailsford, said he supported the decision by the UCI commissaires and apologised to Gesbert and his team for the incident.

“We support and accept the decision by the race organisers to exclude Gianni Moscon from the Tour de France,” Brailsford said. “Gianni is desperately disappointed in his behaviour and knows that he has let himself, the team and the race down.”

Magnus Cort dominated a three-man sprint to win the stage. 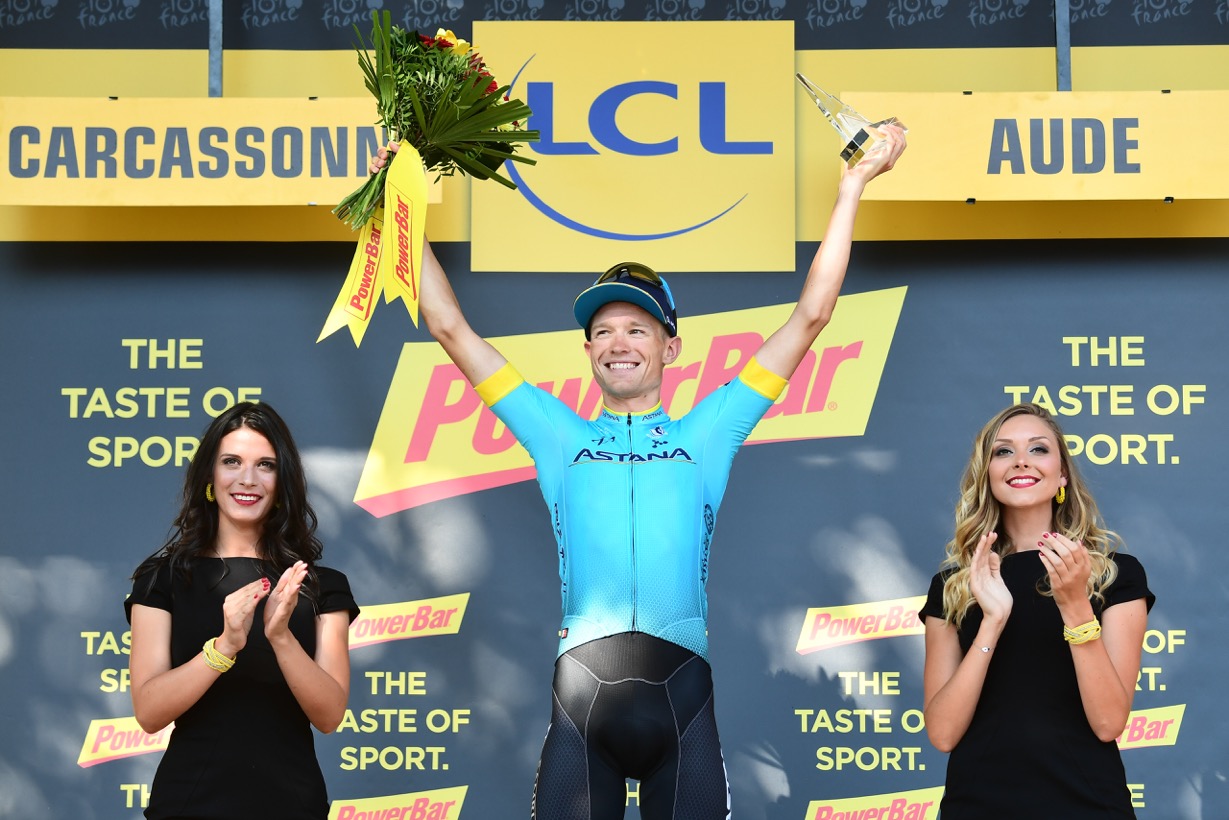 Denmark’s Cort broke clear with Bauke Mollema and Ion Izagirre inside the final six km on the run-in to Carcassonne.

As the strongest sprinter of the trio, Cort duly held off his rivals to claim his first Tour stage win.

The Tour de France riders now face their steepest test – the Pyrenees and there is no doubt Moscon will be sorely missed by Team Sky.

And there is an amazing race brewing. Although the skies maybe clear at the moment, the dominant Sky racing team may have a few storm clouds forming internally. Geraint Thomas leads teammate Chris Froome by 1minute 39 seconds and the way he is currently riding that is enough for him to win this Tour. But he is racing against his mate and teammate who is the best Tour rider in modern history.

On current form it’s hard to see how Thomas can lose. He looks the strongest and Froome looks to be in a bit of trouble. By that I mean he is still coming second but when the pressure has been really applied, especially by big Dutchman Tom Dumoulin, Froome has struggled to keep pace.

But go back three weeks to the Giro d’Italia and Froome looked finished after two weeks of high pressure racing and then, not only did he recover, but he produced one of the greatest rides I have ever seen.

Dumoulin is riding strongly and he has been the only rider able to attack the Sky train with any real conviction and the one rider that looks capable of causing what would be a major coup.

But Dumoulin is definitely not discounting Froome. “I am climbing better than I did at the Giro,” Dumoulin said. “But if Froome produces anther ride like he did up Finestre in Italy then there is nothing I can do.”

After the finish of Stage 15, Thomas said he and Froome needed to race together. And I am sure they will. But I reckon there is going to be a point in the next four days when their hands will be forced and the best rider should come out on top.

I’m just not sure who is the best rider right now. History says Froome, but I lean towards Thomas.

I also expect Mitchelton Scott’s team leader Adam Yates to show something in the Pyrenees. He is far enough back now not to be a threat so should be given a bit of leeway and I think he could take out a stage in the high mountains.

JOHN TREVORROW is a multiple Australian champion road racer and Olympian who has been doing media commentary at the Tour de France for more than 20 ye... END_OF_DOCUMENT_TOKEN_TO_BE_REPLACED

JOHN TREVORROW is a multiple Australian champion road racer and Olympian who has been doing media commentary at the Tour de France for more than 20 ye... END_OF_DOCUMENT_TOKEN_TO_BE_REPLACED

AS A FLASH new members’ stand begins to take shape at Flemington, RHETT KIRKWOOD reveals a secret link between the old stand and a cunning ruse to sell a very slow racehorse END_OF_DOCUMENT_TOKEN_TO_BE_REPLACED

IS nothing sacred? With the Davis Cup turned into a circus and some clown wanting the Melbourne Cup moved, STEVE PERKIN warns of yet another ugly sporting intrusion:. END_OF_DOCUMENT_TOKEN_TO_BE_REPLACED