PRIMOZ Roglic crushed all the opposition to win the final individual time trial, and take his third consecutive Vuelta a Espana.

And Australia has a new grand tour star with Jack Haig taking third overall in a fairytale performance.

With first and second all but secure, all eyes were focused on the battle for that final spot on the podium between Haig and his former teammate, Englishman Adam Yates (Ineos Grenadiers).

Haig started the final stage with a one-minute advantage but that looked under threat early. Yates had taken back half of that by the halfway point in the 33 km stage. Ironically his team Sports Director Aussie Neil Stephens had predicted exactly that to me in an interview just before the stage. And he correctly predicted that Haig would come back in the latter parts of the stage. The boy from Bendigo did just that, becoming only the second Australian to finish on the podium in the Vuelta behind Cadel Evans‘s third in 2009.

“I knew [Yates] would have to go out super hard and I accepted he’d probably have time on me at the top of the climb – that’s the part of the course which really suits him,” Haig said. “I tried to stay calm and relaxed, and I knew that if I did a good ride that unless he was on an amazing day I’d be fine. I stayed relaxed and managed to do it.”

But it is an amazing story that Haig was even on the start line at this Vuelta. His horrific crash on stage 3 of the Tour de France. And complications with surgery meant he was a very late selection for the Bahrain Victorious team.

“Ten days before it started, I didn’t even know if I was going to be here,” Haig said.

“The surgery I needed was worse than I expected. And when I came here, it was to do my best to help Mikel (Landa). A podium was definitely not even considered.”

During the first week, Haig rode for Landa, dropping back to help the Spaniard on more than one occasion and losing considerable time. However, that started to change the day he made it into the breakaway on stage 7 to Balcón de Alicante. Fellow Aussie Michael Storer rode away solo to win the stage but in finishing fifth, Haig moved into the top 10 overall.

“We got so much time in that break that suddenly I was back in the race. But I was never super confident. I just thought I might as well give it a go.”

The other significant performance was from young West Australian Michael Storer. Winning two stages with solo breakaways was impressive but then to top it off by taking the final polka dot climbers jersey was amazing with Storer becoming only the second Australian to win the King of the Mountains title in the Vuelta and only the third to win it in any Grand Tour.

The penultimate day was always going to be one to watch. 200 km, climbing most of the day with a brutal finale.  But it became very controversial when Miguel Angel Lopez (Movistar), sitting comfortably in third overall, found himself on the wrong side of a split in the main peloton. Haig’s Bahrain Swiss teammate Gino Mader, quickly reacted and put the hammer down. Egan Bernal had also missed the move but decided not to help his Colombian compatriot as his teammate Yates was ahead. The next 10 kms was riveting viewing with the gap hovering around 30 seconds but with no one else contributing, Lopez started to wilt. It was here that the young rider known as Superman had a meltdown and retired from the race. A frustrated Team Movistar manager Eusebio Unzue told Spanish radio that he had never lived through a situation like this. “But they’re humans, and he [López] couldn’t solve the problem that was created, when he couldn’t close the gap on his rivals. “He reached a point where he couldn’t go on pedalling. His head disconnected.”

The four-up battle on the final climb was great to watch. Yates was trying desperately to gain time on Haig with Roglic and Mas covering the moves. Haig got distanced on the steepest ramps but managed to come back each time. In the end young Frenchman Clement Champoussin (AG2R) took advantage of the top four marking each other and charged past inside the final two kilometres to steal an impressive win and Haig only lost a handful of seconds. Fellow Bendigonian Chris Hamilton showed just how much he has improved finishing sixth after his solid third on stage 15.

Eleven Australian’s faced the starter’s gun three weeks ago and, impressively, all finished a very tough Vuelta. Beside Haig, Storer and Hamilton already mentioned, there were some stand out performances.

It was a very impressive debut for Queenslander Jay Vine (Alpecin-Fenix), who only joined the pro peloton after winning a stationary bike competition. He was regularly attacking and finished third on stage 14 after a high-speed crash.

Another Queenslander Sebastion Berwick (Israel Start Up Nation) was also riding his first Grand Tour and was often in the breakaways, especially in the final week.

The Aussie squad Team Bike Exchange contained five antipodeans and their challenge was to win a stage and try to put Michael Matthews into the Green sprinter’s jersey. They couldn’t deliver any of that but never stopped trying. Matthews got close a few times, and Nick Schultz, Rob Stannard, Lucas Hamilton, and Damien Howson buried themselves every day trying.

JOHN TREVORROW is a multiple Australian champion road racer and Olympian who has been doing media commentary at the Tour de France for more than 20 ye... END_OF_DOCUMENT_TOKEN_TO_BE_REPLACED

JOHN TREVORROW is a multiple Australian champion road racer and Olympian who has been doing media commentary at the Tour de France for more than 20 ye... END_OF_DOCUMENT_TOKEN_TO_BE_REPLACED 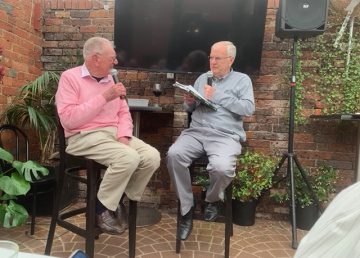 SEVEN DAYS IN SPORT: There’s not much about Melbourne sport than this group of mates don’t know about or haven’t lived through, writes RON REED. END_OF_DOCUMENT_TOKEN_TO_BE_REPLACED

LOOK OUT Australia, India believes it has the fire and fury to beat our weakened cricket team and win its first Test series Down Under. CHRIS de KRETSER reports from the Punjab: VIRAT Kohli’s Indians are confident their coming campaign will echo the best-selli... END_OF_DOCUMENT_TOKEN_TO_BE_REPLACED