Did the selectors slip up with Mitchell Marsh?

KEN PIESSE remains unconvinced that Mitchell Marsh will be anything more than a one-Test player this Ashes summer:

Forty-eight hours later, after just nine innocuous overs spread over four sessions, Marsh the bowler was under the pump, making a mockery of his selection.

A botched soda of a catch at first slip had all Victorians squirming especially after the man he replaced Peter Handscomb took a screamer of a catch as a substitute fielder on Friday.

Handscomb is a first slip specialist and surely would have taken the catch Marsh muffed.

We all know Marsh’s recall was all about resting the three frontline fast bowlers, but maybe someone forgot to tell Steve Smith as he struggled to involve Marsh as his fifth bowler.

Smith so often has been so unmoved by the talents of his batting allrounders that they rarely get a trundle. Hilton Cartwright, Glenn Maxwell and now Marsh are part of the great unwanted this calendar year.

Smith’s attacking philosophies are built around the constant revolving of his Big Three, plus the use of Nathan Lyon, now ranking with India’s Ravi Ashwin as the finest finger spinner in the world.

Given his lack of match bowling coming into the Test — coupled with a Test average of barely 20 —  Marsh can thank his lucky stars that he’s back in Australian colours this week.

Until the Australians bat twice and we see how he goes against Anderson, Broad and Co. over the entire five days of the Test, those of us doubting his recall will have to sit on their hands — for now.

Marsh can most certainly bat… but as a Test No.6? Hmmm.

Let’s give him a couple of innings, but I for one don’t believe he should be packing his bags for a Melbourne Christmas just yet.

Pete Handscomb may yet win a recall for his first home-town Ashes Test.

KEN PIESSE has covered cricket and football for more than 30 years in Melbourne. He has written, edited and published more than 70 sports books. His l... END_OF_DOCUMENT_TOKEN_TO_BE_REPLACED

KEN PIESSE has covered cricket and football for more than 30 years in Melbourne. He has written, edited and published more than 70 sports books. His l... END_OF_DOCUMENT_TOKEN_TO_BE_REPLACED 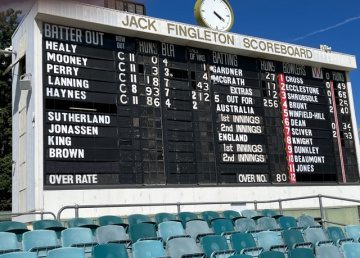 She may have fallen just short of a dream Ashes 100, but Meg Lanning's rescue act has gone a long way to an Ashes series victory, says Ken Piesse. END_OF_DOCUMENT_TOKEN_TO_BE_REPLACED

AUSTRALIAN Rugby is in a crisis, but can the game be salvaged? PETER MEARES looks at the grim state of affairs and offers a solution. END_OF_DOCUMENT_TOKEN_TO_BE_REPLACED