THE HAWK hero, the enterprising Energiser, days of Decadence, and off to the dogs. SCOT PALMER’s premier PUNCHLINES provides plenty of premium provisions for patrons:

WHEN Hawthorn’s fate hung in the balance in 1996 Don Scott became its wartime commander and Ian Dicker the peacemaker. The teaming of these two helped lead the Hawks from the doorstep of a merger to becoming the powerhouse club that Hawthorn is today.

While former captain Scott has stepped away, Dicker remains an active Hawk. He is a key member of the club’s Foundation which is responsible for support and fund-raising, and cherishes the position. But as his days of the presidency (1997-05) are behind him, the passionate business leader has picked out another club that needs his help.

His nearby VFL club Frankston, which lost its licence through lack of funds, has now attracted his attention. “I heard that they were holding a meeting and turned up on the way home,” he told me. “It was the sort of thing that Hawthorn had faced and I thought I could help.” 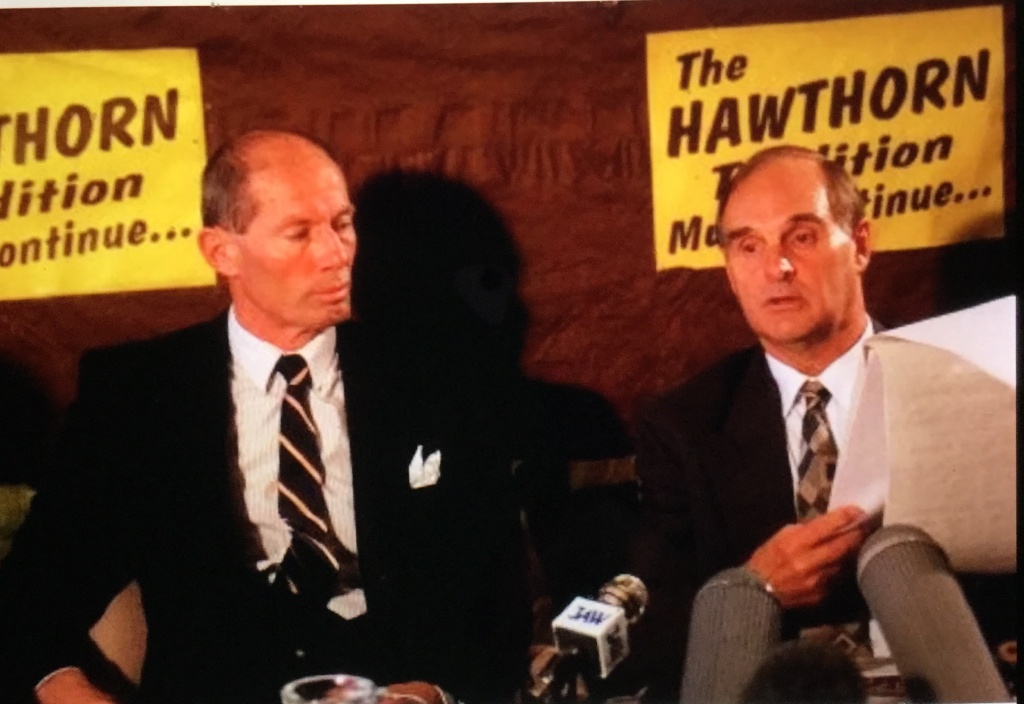 Dicker had a good set of figures to relate: in their darkest hour the Hawks had 11,000 members, now they have 74,000. Dicker is one of the most generous and agreeable men I have met all my years in the game. No request seems to faze him. He has dealt with so much family illness in recent years, handling it privately and with courage. Now that he has thrown his weight behind Frankston I’m told the club has retrieved its licence and the membership has increased to 2,000 or more.

Dicker is owner and managing director of a medical company in Australia and Asia and with his daughter now taking a more prominent role in the business he might just be able to find more time for reviving the Dolphins.

MARK “Jacko” Jackson is no longer the household footy name he was in the 80s when his handstands in the goal square and other antics had fans wondering if they had blundered into a circus. But even these days trying to keep tabs on him would still create a headache for any modern day full-back. Jacko celebrated his 58th birthday this week but already this year the zany, unpredictable has covered over 80,000 km doing what he does well, talking to shock. He has perfected it into an artform as was the case when he lined up on July 26 last year for an interview with commentator Mike Sheahan on Fox. Jackson made no attempt disguise his long-held dislike for Sheahan. “Did you think I went too hard?” he asked me: “It was the talk the country wherever I went.”

The former Melbourne, St Kilda and Geelong spearhead who led the goalkicking at all three clubs, is always on the move doing charity engagements, corporate functions and a never-ending succession of sportsmen’s nights. “I’ve being doing them since 1981 so you could say it’s what I do.”

Jacko had just flown back from the Gold Coast to Sydney when we caught up with him, heading home to his second wife who comes from Latvia and is studying a form of medicine. Warwick Capper of tight shorts fame used to be Jacko’s partner on the speaking circuit but the team has broken up and Jacko continues to go it alone. It seems that audiences can’t get enough of the former full-forward, actor, singer and author, who also managed to enjoy a good little earner from his high-energy commercials for Energizer batteries.

LOCAL folk have a deep love for the River Murray that flows 2,500 km through seven major towns, including Echuca where one former VFL player travels along its waters as our pioneers once did in paddle steamers. Kangaroo champ Ken Montgomery takes in the views of the mighty river from the comfort of “Indulgence” and “Decadence”. These are the two sumptuous five-star boats in his Murray cruising fleet. Monty, 66, a premiership player in 1977, Syd Barker Medallist and Victoria State player, owns six boats that ply their trade from Echuca. Even his two-star craft are something to behold. They have four bedrooms, en suites, jacussis, six or seven TVs, Foxtel and BBQs. They are rated among the finest afloat. Ken has always been into boats but began this business with wife Julie seven years ago. “She is the skipper and I am the vice-captain,” he smiled as Julie was putting preparation together for a ladies’ luncheon cruise. Ken still keeps a close eye on North Melbourne’s fortunes where he was one of the youngest to play at 16. He later became chief executive of the club before the call of the Murray took hold. 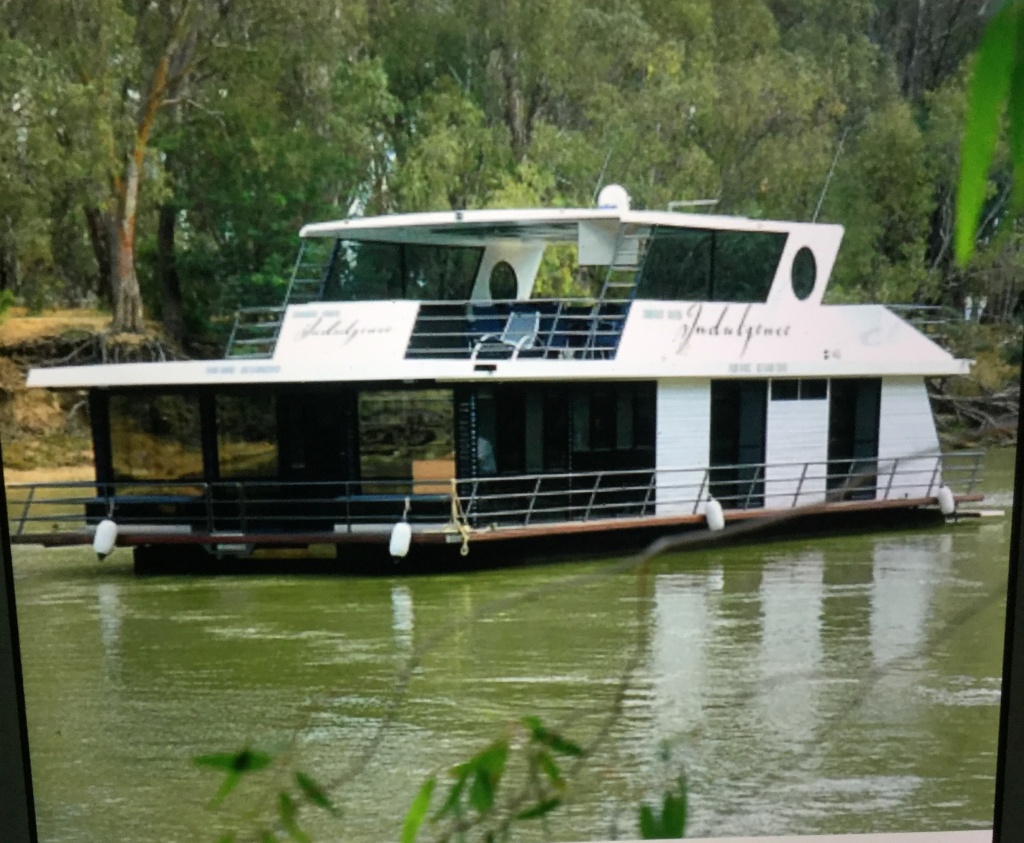 DOG racing has emerged from a tough period of both public and self-examination and is now racing forward, relying heavily upon two clubmates from North Melbourne. Chief executive Greg Miller and his close friend Francis Trainor are planning events for Sandown that hopefully will bring crowds back to the iconic track. Trainor is something of a marketing guru who for many years was responsible for the organisation of the Kangaroos Grand Final Breakfast. Most of Australia’s leading politicians and sportsmen attended as VIPs on the morning of the big match. Miller has been in charge of the greyhounds for seven years and feels that the sports is flourishing again now that many of the old practices have been done away. He feels that feature events where a build-up of interest takes place is a key to success and this where Trainor’s expertise will help. Both the blokes remain committed Kangaroo supporters and attend as many games as they can.

VERY few personalities are as well known in the world of sport as SCOT PALMER. He was a fine sportswriter on The Sun News-Pictorial and a news-breakin... END_OF_DOCUMENT_TOKEN_TO_BE_REPLACED

VERY few personalities are as well known in the world of sport as SCOT PALMER. He was a fine sportswriter on The Sun News-Pictorial and a news-breakin... END_OF_DOCUMENT_TOKEN_TO_BE_REPLACED

As the other football codes continue to flourish, Australian Rugby has been having an extremely trying time, as PHIL BURFURD reports. END_OF_DOCUMENT_TOKEN_TO_BE_REPLACED

AUSTRALIA is headed for a bleak medals haul in athletics at the Commonwealth Games this year if the final Commonwealth rankings lists are anything to go by, as MIKE HURST reports: END_OF_DOCUMENT_TOKEN_TO_BE_REPLACED