The Tigers’ Fighting Fury is flushed with success

COMMITTED Magpie TERRY BROWN bravely ventures into the cauldron of Tigerland pub-land, soon after the final siren. What he finds is pleasure, passion but still the pangs of pessimism:

AT the closest pub to the G, an hour after the siren, nobody is talking flags. It has taken 5,837 days, but despite the umps and odds, the Tiges have cracked a finals win.

There is a reason the song talks about Tigers of old.

At the Cricketers Arms, the relief is palpable, not least in the loos where fans are jettisoning MCG mid-strength beer substitute.

Two men stand side by side, whistling the Richmond song together and beaming. Urinal etiquette has broken down in Tigerland, again. 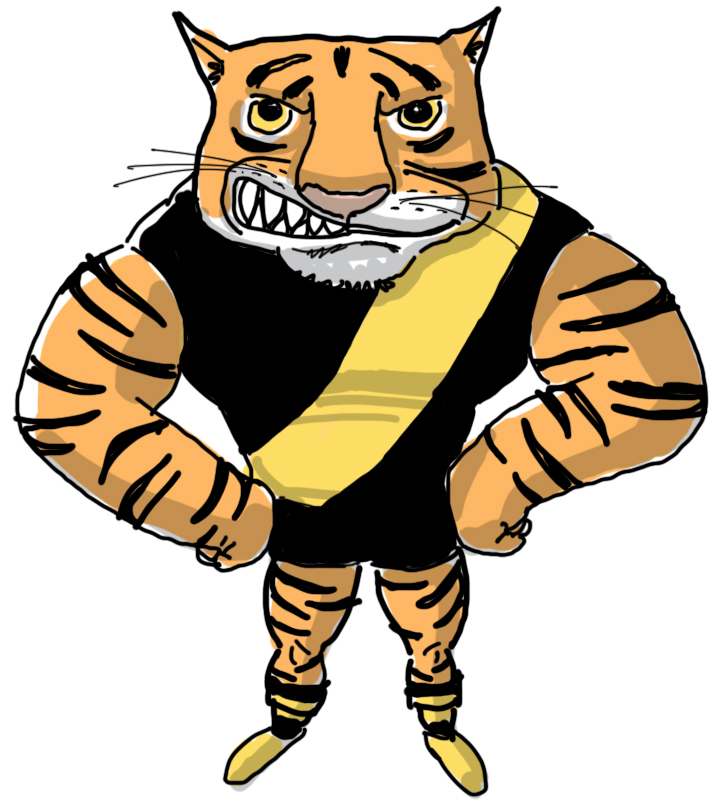 At Richmond Station earlier, commuters fleeing the 5:13 to Carrum were assailed with the Tigers song, booming from speakers in the boys’ bogs.

Usually dunny songs are to drive out undesirables, like the lights that don’t show veins. They are so bad, normally, they could be Grand Final entertainment.

Not this Friday. Metro Trains has a party in its privies.

In Richmond now, you can’t pee without someone yelling Yellow and Black at your back!

At the Cricketers Arms, the whistling stops and the whispering starts.

“How f…ing ripper was that!” one bloke says.

“The boys have done well,” the other comes back, bursting with only pride now.

And it stops there.

It might have just been whistling through the graveyard?

For weeks now, the prospect of approaching success has terrified Richmond supporters.

They have been mooching around Richmond like less useful O-Bikes, giving each other desperate looks, too scared to be happy, to whipped to hope.

The local homeless must be sick of them, all the competing confusion and beanies.

Fans of other more sensible persuasions have noted that Richmond types are oscillating madly from elation to dread. You could generate power with them.

They are not three weeks into the finals so much as three chambers into Russian roulette. They are waiting for the click you never hear.

Up the road, the All Nations has gone to the not very extreme of photoshopping Tigers colours on to the pub social media. Yellow and Black is a fine war cry but hell to paint over in a fortnight’s time. They may have been burnt before?

Facebook is swamped with Tigers fans begging people to stop talking about the team.

After the game at the Cricketers Arms, it is fair to say the Tigers faithful are in mild shock.

They have part run, part flown there three choruses after the siren, with perhaps a quick genuflection down at the Punt Rd Oval.

A slower trickle of Cats fans have slunk off, doing creditable impressions of a Scott sooking. They will have plenty more reason soon because the parking inspectors have been around.

Raised a Roy Boy, he lost one team and doubled down on Richmond.

“I’ve never seen a qualifying final win ever. Even Fitzroy,” he says, more concerned than happy.

Probably half the living Richmond supporters know only football failure. Ninth, they know about, and barely having a chance.

The double chance Friday night has thrown them, and the last quarter and Dusty!

By last drinks, the Tigers army is back ready to roar quietly into its scarf again, expecting a rusty Kevin Bartlett badge to send their lip septic.

The lid goes back loosely, and, damn, The Killers – Mr Brightside – comes on the speaker in the bar. The GF band. A bit of an omen!

Torn Tigers wander off to the station and its singing porcelain. The earlier-serenaded 5.13 Carrum is a score line now. Another omen?

Richmond fans wonder if, for the exceptionally hopeless, there is sometimes real hope?

TERRY BROWN worked for many years as a general reporter, columnist and colour writer at The Sun and Herald Sun. He is now an academic lecturing in jou... END_OF_DOCUMENT_TOKEN_TO_BE_REPLACED

ShareTweetShare on Google+Pin on PinterestSend with WhatsApp
82 recommended

TERRY BROWN worked for many years as a general reporter, columnist and colour writer at The Sun and Herald Sun. He is now an academic lecturing in jou... END_OF_DOCUMENT_TOKEN_TO_BE_REPLACED

AUSTRALIAN women are performing at the highest levels across a wide range of sports but many of them are doing so without any real recognition, says LOUISE EVANS. END_OF_DOCUMENT_TOKEN_TO_BE_REPLACED

SEVEN DAYS IN SPORT: Richmond do it the hard way as they become one of the great teams in history, says Chief Writer RON REED. END_OF_DOCUMENT_TOKEN_TO_BE_REPLACED