SPRINT king Mark Cavendish’s dream comeback at the Tour de France continued as he sprinted to victory on stage 6 into Chateauroux, the town where he won his first ever Tour victory in 2008.

Cavendish also won there in 2011 and this was his 50th grand tour stage victory and his 32nd in the Tour de France sneaking ever closer to Eddy Merckx’s record of 34.

With still three more stage win opportunities for the sprinters, the media are pressing Cavendish to comment on whether he can win two more to match Merckx, but Cav is reluctant to talk about it. “Don’t mention the name, don’t mention the name,” he joked when the first journo mentioned it.

Big bunch finishes are all about the lead out trains and in the final kilometre it was riveting to watch the duel between Deceuninck Quickstep leading the Manx Missile and the Alpecin-Fenix squad guiding Jasper Philipsen and Tim Merlier. Deceuninck had the luxury of the World Champion setting the pace into the final kilometre while Alpecin ranged alongside led by race leader Mathieu van der Poel.

In the final 300 metres it was Merlier who forged to the front with Philipsen glued to his wheel but Cavendish had the speed to swoop past the pair with Philipsen hanging on for second and Frenchman Nacer Bouhanni taking third for his third time on the podium this Tour.

Australian Michael Matthews (Team BikeExchange) finished ninth and is now 52 points behind Cavendish in the battle for the Green jersey. But that can change quickly especially as we move into the tougher intermediate stages where, hopefully, Matthews can produce his superior climbing skills.

The overall standings had a big shake up after the stage five individual time trial. A lot of the specialists struggled because of previous crashes but Dutchman van de Poel surprised everyone with a brilliant fifth in the race against the clock only 31 seconds behind a dominant stage winner Tadej Pogacar (UAE Emirates) to keep the jersey by eight seconds.

Primoz Roglic (Jumbo Visma) was obviously hindered by his injuries but finished a solid seventh dropping 44 seconds on his Slovenian compatriot and is now 1 min 48 seconds behind in 10th place. His Danish teammate Jonas Vingegaard finished third only 27 seconds down and, with his excellent climbing form, could be an option as the leader of Jumbo Visma.

The Ineos Grenadiers team were touted as the most powerful but are showing signs of cracking. Geraint Thomas is obviously struggling after his big crash on stage three. The Welshman would normally have been one of the favourites in the race against the clock but he finished 16th losing 1min 16 seconds and is now 12th overall at 1min 54 seconds. Their leading rider is Ecuadorian Richard Carapaz who is not a great time trialler and finished 23rd losing 1min 44 seconds and is now ninth overall at 1min 44 seconds. Aussie Richie Porte was easily Ineos’s best rider with a strong ninth at 55 seconds but is 3 min 58 seconds back in 25th place.

Ararat’s Lucas Hamilton (Team BikeExchange) sits one spot and one second further back, while West Australian Ben O’Connor (AG2R Citroen) is 33rd at 4 min 56 seconds. All three will be looking forward to the mountains which start on stage eight.

JOHN TREVORROW is a multiple Australian champion road racer and Olympian who has been doing media commentary at the Tour de France for more than 20 ye... END_OF_DOCUMENT_TOKEN_TO_BE_REPLACED

JOHN TREVORROW is a multiple Australian champion road racer and Olympian who has been doing media commentary at the Tour de France for more than 20 ye... END_OF_DOCUMENT_TOKEN_TO_BE_REPLACED 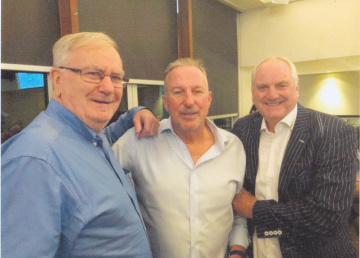 Cricket … AFL … any code of football for that matter … cycling … boxing … athletics … any Olympic sport for that matter … you can name any sport and Ron Reed could write about it. END_OF_DOCUMENT_TOKEN_TO_BE_REPLACED