TOO many people are adding to the risk that has seen a star rider test positive to the virus at the cycling tour of Italy, writes JOHN TREVORROW:

THE corona virus has hit the Giro d’Italia with one of the race favourites, Englishmane Simon Yates of the Australian team Mitchelton Scott testing positive to Covid-19 after Friday’s stage 7 and sending shock waves throughout the peloton.

“Simon said he didn’t feel great after the stage finish and had a slight temperature,” Team Sports Director Matt White said. “We immediately contacted the organisers and they did a rapid test which only takes 15 minutes to get the result. Unfortunately it was positive so they then did a more intensive test which confirmed the positive result. They also tested all the riders and staff who were all negative.”

“Simon has been transported up to our base in Northern Italy by an ambulance supplied by the organisation where he will go into quarantine for the next two weeks. He is actually not feeling too bad and I’m sure he will bounce back quickly,”

“We are not sure where or when he actually contracted it but it probably goes a little way into explaining why he struggled in stage 3 up Mt Etna,” White said.

White was also quite scathing regarding some of the protocols, or lack of, that have been in place.

“Some of the hotels have had a lot of other guests and tourists, not involved in the race, staying at the hotel and passing through,” White said.

“That’s a lot of exposure with a lot of people around. They may have been wearing varying level of masks but often not wearing it correctly. The Giro’s COVID-19 precautions were not as strict as I would have expected.” It’s hard to change an attitude or even a culture overnight.”

Yates’ positive test has cast doubt on the whole bubble concept that has allowed the return to racing.

Riders are isolated from the outside world in the lead-up to the race and throughout the event, only interacting with teammates and team staff who are also supposed to be kept clear of the public.

The distance from family and friends is supposed to ensure that the riders cannot contract the virus and then transmit it to teammates or competitors during the race but when hotel staff and guests are not following these protocols with the same level of seriousness then there is a possibility of transmission.

Giro d’Italia Race Director Mauro Vegni went on television and attempted to put a positive spin on the situation saying that Yates’ positive test was discovered by the Giro’s boosted testing protocols, which go above and beyond the UCI requirements. The positive test, Vegni said, is a sign that the Giro’s safety measures are working.

“Yates is the first case after 10 days. The early detection operations are working well, which is what made us able to check Yates’ positivity, and the negativity of everyone else on the Mitchelton team,” Vegni said. “If we only followed the protocol established by the UCI, we should have taken the sample last night, send it to Milan overnight and wait for the result that would have happened tomorrow. So Yates could have run today, with the risk of infecting other riders.”

The British rider burst clear from the original six-man breakaway with 18 km to go and held off a late chase from the remnants of the break to win the stage ahead of Salvatore Puccio (Ineos) and Matt Holmes (Lotto Soudal).

This was the second Giro stage win for Dowsett who beat Bradley Wiggins to take the individual time trial stage in 2013.

The racing in this Giro has been brilliant with action virtually from the drop of the flag each day. Stage seven saw a record average speed of 51 kph which, even with a predominantly tail wind, is quite amazing.

That frenetic racing has also seen a lot of crashes with Edoardo Allfini (Mitchelton Scott) out with a broken finger and Sean Bennett (EF Pro Racing) and Tony Gallopin (AG2R La Mondiale) both out of the race with a broken wrists. There are some very sore and sorry riders who will appreciate Monday’s rest day

JOHN TREVORROW is a multiple Australian champion road racer and Olympian who has been doing media commentary at the Tour de France for more than 20 ye... END_OF_DOCUMENT_TOKEN_TO_BE_REPLACED

JOHN TREVORROW is a multiple Australian champion road racer and Olympian who has been doing media commentary at the Tour de France for more than 20 ye... END_OF_DOCUMENT_TOKEN_TO_BE_REPLACED

ARE THE Demons genuine contenders for a top finish in 2018? GEOFF HARRIS reviews the season ahead and tips a top two finish for the long-suffering Demons fans. END_OF_DOCUMENT_TOKEN_TO_BE_REPLACED 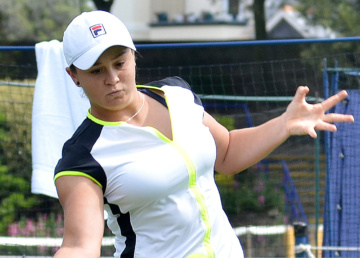 AUSTRALIA’S world-beating tennis superstar hasn’t lifted a racquet for months but she is still the best in the business, writes CHRIS McLEOD. END_OF_DOCUMENT_TOKEN_TO_BE_REPLACED