FANS rushing along beside Tour riders is a problem in itself, but today’s great mountain stage was marred by disgraceful behaviour. JOHN TREVORROW reports:

GERAINT Thomas has breathed new life into this Tour de France. He looks by far the strongest rider in the race and he was noticeably stronger in a controversial Stage 12 than his Sky Teammate Chris Froome.

It was a monster stage with 5,000 metres of climbing but it all came down to the final ascent of the famous Alpe d’Huez. The Dutch climber Steven Kruiswijk had nearly five minutes lead as they hit the climb, but it was never going to be enough.

Thomas became the first rider from Britain to win on the Alpe and, surprisingly, the first winner wearing the leader’s Maillot Jaune.

The Welshman won in an uphill sprint from Dutchman Tom Dumoulin, with the French champion Romain Bardet third at the end of the 175.5km stage from Bourg-Saint-Maurice.

Froome was just behind in fourth with Spaniard Mikel Landa fifth.

There was the ugly side to today’s stage where many French fans were booing Team Sky and specifically Froome. One fool even pushed Froome and it was good to see him spread out on the ground with the handcuffs on. It’s bad enough with the idiot fans who run next to the riders, but this is just not acceptable.

Asked about the incidents that marred this great Alpine stage, Thomas said: “I didn’t see that, but if people don’t like Sky and want to boo that is fine.

“Do all you like, but let us race, don’t affect the race, don’t touch the riders, don’t spit at us. Have a bit of decency. Voice your opinion all you want, but let us do the racing.”

Other than Thomas, the most impressive ride came from his Colombian teammate Egan Bernal. He set the pace for most of final climb and when the big attacks came from the contenders such as Nibali and Quintana, the 21-year-old future star just pulled them back. Any wonder Sky have just signed him up for three years on multi-million Euro contract.

I’m getting quite excited about what’s ahead over the final half of this Tour. I have to admit I was pretty flat after Stage 11 with Mikel Nieve from Mitchelton Scott just falling short and Adam Yates having a bad day. Things didn’t improve much for the Australian team on Stage 12 but watching the flying Welshman Thomas take this race by the scruff of the neck has definitely reinvigorated me and many Tour followers.

We now have three transition stages where the contenders will take a chance to recover and then the final rest day on Monday, before three huge days in the Pyrenees. It is going to be a great battle and although Bardet and Dumoulin look the main dangers to the Sky team, this Tour de France is going to be a two-man battle between two mates who happen to be teammates. 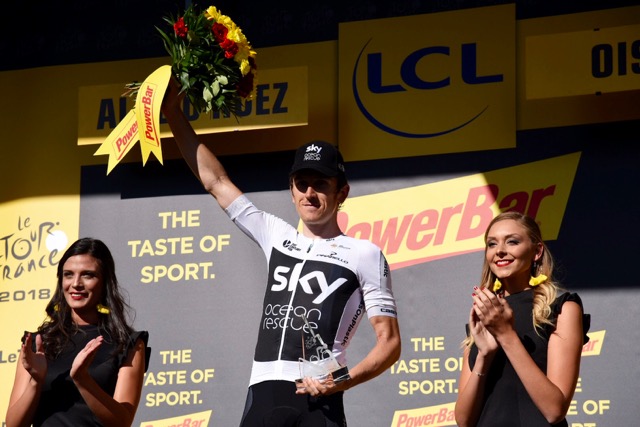 There is no way Froome will just lie down and say, “This is yours.” And although Thomas may be saying that Froome is still the man, his legs don’t seem to be speaking the same language. We can expect a battle royal.

JOHN TREVORROW is a multiple Australian champion road racer and Olympian who has been doing media commentary at the Tour de France for more than 20 ye... END_OF_DOCUMENT_TOKEN_TO_BE_REPLACED

JOHN TREVORROW is a multiple Australian champion road racer and Olympian who has been doing media commentary at the Tour de France for more than 20 ye... END_OF_DOCUMENT_TOKEN_TO_BE_REPLACED

RICHMOND fans are still on a high after beating Adelaide in the 2017 AFL Grand Final, writes CHERYL CRITCHLEY END_OF_DOCUMENT_TOKEN_TO_BE_REPLACED

LOOK OUT Australia, India believes it has the fire and fury to beat our weakened cricket team and win its first Test series Down Under. CHRIS de KRETSER reports from the Punjab: VIRAT Kohli’s Indians are confident their coming campaign will echo the best-selli... END_OF_DOCUMENT_TOKEN_TO_BE_REPLACED