Australia’s hopes crash out with Porte

DESOLE. It’s a French word which translates loosely between “Desolated”, “Devastated” and “An empty feeling in the soul.”

And that’s how we all feel after Richie Porte tragically crashed out of the Tour de France less than 10 kilometres into the start of stage nine in Arras.

This region is synonymous with Australian tragedy. Thousands of Aussie diggers lost their lives on the western front in the Great War and there are some amazing monuments built in this region to honor them. The night before Stage 9 there was a special service and again on the morning before the stage. Not that you can compare the devastation of war to losing a bike race, but all of the Aussies on the Tour feel like holding an impromptu gathering to lament the downfall of our great hope.

I honestly believed that if Richie could get through this stage he would be a realistic chance of winning this Tour de France. You didn’t need to be a rocket scientist to know that this cobbled stage was always going to be Richie’s biggest challenge, but he didn’t even get a smell of the Pave’. The seemingly simple fall so soon after the start looked inconsequential, but the collarbone is the easiest bone in the body to break and it doesn’t take that much impact to split it apart.

I just hope it doesn’t break his spirit.

The vision of Richie sitting on the road with tears rolling down his cheeks will live with many of us for a long time. Ironically it was stage nine last year when Porte crashed out on a descent and fractured his pelvis. Hopefully he can reset his program and come back for the Vuelta d’Espana in August.

For the Aussie Mitchelton Scott team it was a good day. Team leader Adam Yates managed to stay out of trouble and finish in the main peloton with Chris Froome and is now sitting ninth overall only one spot behind Froome and on the same time.

John Degenkolb (Trek) won Paris Roubaix back in 2015 but has had to come back from the wilderness and overcome some personal setbacks and serious injury to finally snare another major victory.

He attacked with race leader Greg Van Avermaet (BMC) and Belgian champion Yves Lampaert (Quick-Step Floors) on the second last section of cobbles only 17 kilometres from the finish and was too quick for the Belgian pair. 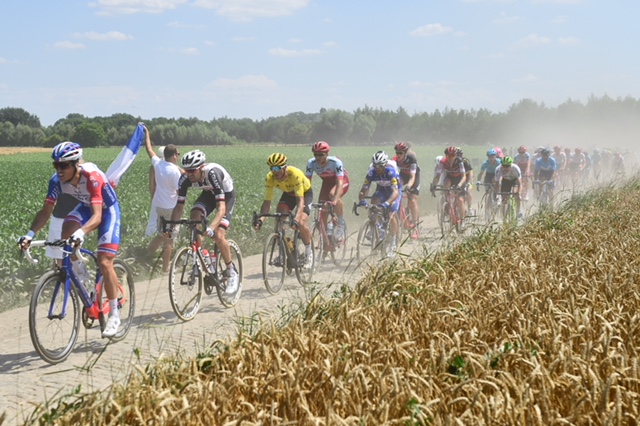 As exciting and eventful as the Tour has been over the first nine days, the real bike race for the overall contenders starts tomorrow with the first of three consecutive days in the Alps. Stage 10 has five climbs including three category 1 and 1 HC (above category) monster. And just to make it interesting they have included a 1.8 km section of gravel at the top of the major climb.

JOHN TREVORROW is a multiple Australian champion road racer and Olympian who has been doing media commentary at the Tour de France for more than 20 ye... END_OF_DOCUMENT_TOKEN_TO_BE_REPLACED

JOHN TREVORROW is a multiple Australian champion road racer and Olympian who has been doing media commentary at the Tour de France for more than 20 ye... END_OF_DOCUMENT_TOKEN_TO_BE_REPLACED

ARE imported horses stealing our major races and the big prizemoney at the expense of Australia-bred gallopers? BRIAN MELDRUM dissects the results: END_OF_DOCUMENT_TOKEN_TO_BE_REPLACED

ARE THE Demons genuine contenders for a top finish in 2018? GEOFF HARRIS reviews the season ahead and tips a top two finish for the long-suffering Demons fans. END_OF_DOCUMENT_TOKEN_TO_BE_REPLACED