AARON FINCH’S progression from white-ball specialist into a genuine Test team contender will continue next week when he is named Victoria’s new captain for the must-win game against New South Wales. KEN PIESSE reports:

FROM NOT being ranked among Victoria’s top six red-ball batsmen just 12 months ago, Aaron Finch’s bid to play for Australia at all three forms of the game is building momentum.

With Peter Handcomb absent on Test duties from late next week in Brisbane, Finch will lead the Vics in back-to-back matches against NSW (from November 24) and Western Australia (from December 3).

Victoria’s head coach Andrew McDonald says Finch’s promising start to the Shield season is no fluke. Few have worked harder and he deserves to be in contention for a middle-order batting berth at Test level.

With the Test XII due to be released on Wednesday, Test team candidates have just one or two more days of Shield cricket to impress as round three of the competition begins.

McDonald says Glenn Maxwell deserves to play at Number Six in the Tests. “He’s the incumbent and he made a century just three or four Tests back (against India at Ranchi),” he said.

He would also at least start Matthew Wade in the team as wicketkeeper, ahead of NSW’s Peter Nevill or South Australia’s Alex Carey, believing that there is not a great deal of difference in standard between the three.

Since being recalled to the Test team just under 12 months ago, Wade has played Australia’s last 10 matches, home and away, averaging almost four dismissals a Test, but only once making a score above 40.

McDonald described as “absurd” talk that Queensland’s Matthew Renshaw hasn’t the runs to warrant his continuing selection at the head of the order.

“He’s 21 and has the brightest possible future,” he said.

McDonald believes should Victorian pace pair Scott Boland and Chris Tremain continue to deliver that one or both will find themselves back in Australian colors, sooner rather than later.

Each has taken a dozen wickets in the opening two Shield games.

KEN PIESSE is in the frontline of our expert sportshounds.com.au team covering the Ashes from November 23.

KEN PIESSE has covered cricket and football for more than 30 years in Melbourne. He has written, edited and published more than 70 sports books. Signe... END_OF_DOCUMENT_TOKEN_TO_BE_REPLACED

KEN PIESSE has covered cricket and football for more than 30 years in Melbourne. He has written, edited and published more than 70 sports books. Signe... END_OF_DOCUMENT_TOKEN_TO_BE_REPLACED

Why Patto is the world’s best spare bowler 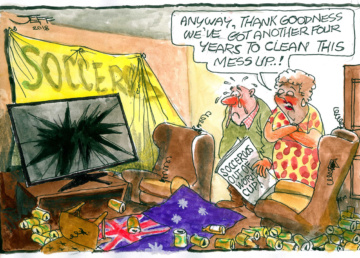 THE Big Bash is losing followers at a rapid rate that must be worrying our cricket chiefs. GRAHAM BICKNELL explains why he is disenchanted. END_OF_DOCUMENT_TOKEN_TO_BE_REPLACED

From MCG hero to a hermit

The greatest match of all

Homage for a hero