THE WEEK THAT WAS: READ ALL ABOUT it – the most ubiquitous man in football is spreading the gospel again, and it is high time the AFL properly recognised his massive contribution to the game, writes RON REED:

THE WEEK THAT WAS: Is there no end to Kevin Sheedy? You would certainly have to hope not. For football, he is the gift that just keeps giving. There he was again this week, making another substantial contribution with the publication of a new book, Celebrating 50 Years of Footy, and taking the opportunity to tie it in with his concern for the well-being of one of his proteges, former Essendon captain and coach James Hird, who he invited to speak at the launch. By my possibly imperfect count, this is at least the 12th book by him or about him, which would be a highly impressive body of work on behalf of the game even if he had contributed nothing else. I don’t believe anybody else in football has been the subject of so many books, and from other sports perhaps only cricketers Don Bradman and Richie Benaud would beat it.

Sheedy, you have to keep reminding yourself, is only a few short weeks away from his 70th birthday and still looks and acts like a man in the prime of his life – that’s no great surprise, really, because he figures that all of life is prime time. He is not retired, in the usual sense of the word, continuing to work more or less full-time with Essendon while lending his massive profile to any other projects for which he believes his presence might be beneficial for the game that has consumed his life.

Which prompts the question: has any other living person done as much for football as he has? Well, put it this way – if you wanted to nominate somebody as Mr Football, Sheedy would be very hard to beat. For a long time now, that title has been the unchallenged preserve of Ronald Dale Barassi, and for very good reason. Barassi played 254 games in an era of 18-game seasons, plus another 19 for Victoria, coached in 515 at four clubs, winning four premierships and had a prominent presence in the media for many years – and yes, is the subject of at least four books. For most of his life he has been the face of the game. But he hasn’t been actively, or officially, involved for the best part of 20 years now (he last coached in 1995) and it is probably fair to suggest that at least a couple of iconic characters have displaced him as the contemporary “faces” of the game.

Sheedy is one, another is Leigh Matthews. Not quite shoulder to shoulder with them is Kevin Bartlett, whose 404-game career was followed by a stint of coaching at Richmond while he has also served on the AFL rules committee and, of course, continues to work well into his 70s as one of the most prominent media commentators. Matthews is pretty much in a class of his own, with 332 games and 14 for Victoria, plus 461 games as a coach for four premierships, the same number of flags as Barassi and Sheedy. As well, Matthews remains a force in the media, quite possibly the game’s pre-eminent commentator.

Where Sheedy’s contribution probably exceeds that of Barassi, Matthews, Bartlett and probably anyone else you care to name is his work as a visionary on behalf of indigenous players, the Anzacs, country people and women. They say a measure of success is if you can leave a place in better shape than you found it and that can be said of Sheedy and football in spades. There is no part of it he hasn’t touched, for the better. And as anybody who has ever met him, let alone been an associate over a long period, will testify, he is an easy man to approach and an inspirational one to know.

If there were knighthoods in footy he would surely, by now, have been tapped on the shoulder with somebody’s sword and commanded to “arise, Sir Kevin.” In fact, the AFL has, regrettably, missed its chance to do that. The league does have the equivalent of a knighthood – that would be Legend status in its Hall of Fame. Barassi, Matthews and Bartlett have long been accorded that honour. Sheedy hasn’t. He is in the Hall of Fame, of course, but “only” as a coach, which is also the case with the Sport Australia Hall of Fame, which embraces all sports. Technically, that fails to properly recognise the breadth of his work, although when he was inducted by the AFL in 2008 his citation read in part: “His innovative methods and ability to spread the football ‘gospel’ made him one of the game’s unique characters.” It would be a change of policy for the League to confer Legend status on someone for reasons beyond their contribution as a player, famously demonstrated in the case of Lou Richards, who was denied the honour despite intense lobbying by supporters who believed his media work deserved to be taken into account. Sheedy, surely, has done more than enough – and continues to do it – to be thanked by the game in the best way possible. It’s time he was a Legend.

THE uproar that suggests Richmond footballer Nathan Broad got off too lightly for his regrettable – and pretty stupid – offence of distributing a photo of a topless girl, against her wishes, while drunk during the premiership celebrations, is entirely predictable – but misguided. Broad has been suspended for three matches, which will cost him $20,000 in match payments, and has had his own reputation trashed and been publicly humiliated. Presumably it has also cost him a friend he says he cares about. By any reckoning that adds up to a substantial penalty, one that will he will wear in some shape or form for the rest of his career. If that’s not enough, what is? Ten weeks? The entire season? Throw him out of football altogether? If he is not already suitably and genuinely remorseful, and if the message hasn’t already got through to every other young bloke who might feel like doing the same thing, how is adding a few more strokes of the whip going to change his or anyone else’s mindset? Enough is enough. Young people do make mistakes – they shouldn’t be hung, drawn and quartered for it.

TENNIS Australia chief Craig Tiley said this week that Bernard Tomic was still a chance to be given a wild card into the Open, a decision that will be made by Davis Cup captain Lleyton Hewitt and performance manager Wally Masur.  It won’t be a popular decision if they do, given Tomic’s self-destructive descent into the wilderness for the entirety of this year. His arrogant boast that he could buy and sell most fans many times over, plus his disinclination to make any effort to represent his country in the Davis Cup, not to mention his free-fall down to 145 in the rankings, will make people reluctant to pay good money to watch him perform, especially when the coveted wildcards could be used to encourage young talent. He should be made to work his way through the qualifying tournament – if he can – with no other free kicks on offer.

Not for the first time – and hopefully not for the last – cheers to the mighty mare Winx, whose amazing story just keeps getting bigger and better.

British F1 driver Lewis Hamilton is a crusty customer who can be difficult to deal with but, hey, he’s good. By winning his fourth drivers’ championship with two races to spare, he has joined Sebastian Vettel and Alain Prost and is now in hot pursuit of Juan Fangio (five titles) and Michael Schumacher (seven) as the best ever. You wouldn’t bet against him.

Richmond premiership player NATHAN BROAD cops three weeks suspension and a public humiliation for his infamous photo-sharing escapade after the grand final – and he’ll be a long time living it down.

RON REED has spent more than 50 years as a sportswriter or sports editor, mainly at The Herald and Herald Sun. He has covered just about every sport a... END_OF_DOCUMENT_TOKEN_TO_BE_REPLACED

ShareTweetShare on Google+Pin on PinterestSend with WhatsApp
54 recommended

RON REED has spent more than 50 years as a sportswriter or sports editor, mainly at The Herald and Herald Sun. He has covered just about every sport a... END_OF_DOCUMENT_TOKEN_TO_BE_REPLACED

LOOK OUT Australia, India believes it has the fire and fury to beat our weakened cricket team and win its first Test series Down Under. CHRIS de KRETSER reports from the Punjab: VIRAT Kohli’s Indians are confident their coming campaign will echo the best-selli... END_OF_DOCUMENT_TOKEN_TO_BE_REPLACED 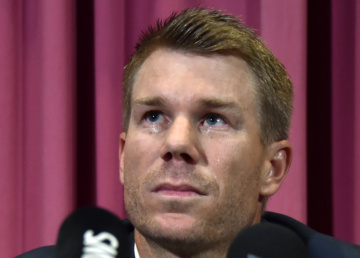 STEVE Smith’s superb Ashes campaign wasn’t enough to have him voted Australian cricketer of the year and there was a reason for that, says Chief Writer RON REED. END_OF_DOCUMENT_TOKEN_TO_BE_REPLACED