Why Trent Cotchin and Cameron Smith are leading the premiership charge

ALL GREAT armies need to be led from the front and football – of any sort – is no different. Fortunately for Richmond and the Storm, they have the right men to ensure that happens, says Chief Writer RON REED:

TRENT COTCHIN PROBABLY wasn’t the only Grand Final captain in Melbourne with more than a passing interest in the controversial deliberations of the AFL’s Match Review Panel. Cameron Smith knows the feeling well. He was captain of the Storm rugby league team in 2008 when he was rubbed out for a grapple tackle on Brisbane’s Sam Thaiday and missed the premiership play-off. In the absence of their best and most inspirational player, Storm were demolished 40-0 – the biggest margin ever in a decider – by Manly-Warringah. It was a jinxed year because Storm were later stripped of the minor premiership – finishing on top of the ladder, in other words – over the infamous salary cap rort, and coach Craig Bellamy was fined $50,000 and threatened with legal action for claiming the judiciary had been biased towards Smith.

Smith is still captain and will lead the men in purple into yet another Grand Final – their seventh in 12 years – against North Queensland Cowboys on Sunday. By now, he has become certainly the most decorated and possibly most influential captain of any major team in Australian sport. Cotchin is not quite in that conversation just yet but is certainly going to be a hugely important factor when he leads Richmond on to the MCG against Adelaide on Saturday. The sporting capital’s chances of being in premiership celebration mode across two codes come Monday morning will depend enormously on how effectively they are led from the front.

Whatever you think of the legalities of Cotchin’s collision with the Giants’ Dylan Shiel in the Preliminary Final – and, yes, he was certainly fortunate to escape suspension, although I for one do not believe his intentions or even his execution of the contest warranted a penalty as huge as this would have been in the circumstances – the big day would have lost something by his enforced absence. He is a far more formidable figure now than at any previous stage of his career – most certainly a more effective leader and also a better player, to the extent that his by-default Brownlow medal does not look out of place. He was a match-winner against the Giants, every bit as much as the unstoppable Dusty Martin or the brilliant goalsneak Daniel Rioli were. If he had been banned, Richmond’s chances of beating Adelaide would be diminished significantly, not just because of his own input but because it would have limited coach Damien Hardwick’s options in employing Martin in the forward line as well as in the middle, where the Crows are so powerful.

Cotchin has been widely praised for the manner in which he has tackled the leadership responsibilities after taking a while to come to terms with them and is now viewed as a much more effective influence on those around him. He earned a big tick inside and outside the club when he was filmed cleaning up rubbish from the dressing rooms after a recent match, and again when he ran 100 metres after the siren last Saturday, not to engage in back-slapping with the other victors – he knew there would be plenty of time for that — but to console his former long-time team-mate Brett Deledio, who is now with GWS. These are signs of impressive character and probably go a long way to explaining why Cotchin does have the (c) next to his name.

As for Smith, he is on track to complete the most successful season by an individual in NRL history. He has already led Queensland to another State of Origin victory, Storm to the minor premiership, broken the competition’s games record, broken the record for most wins at premiership level, become the first man to kick 1,000 goals and is one point away from moving into equal second place on the all-time points-scoring list. Obviously, another premiership beckons and on Wednesday night he added a second Dally M Medal as the league’s best player, a third as best captain and another as best hooker, while the Churchill Medal for best afield in the Grand Final is also there for the taking,.Even then he would not be finished – the World Cup lies ahead.

To general astonishment, the only thing he hasn’t won is the Rugby League Players’ Association award, which is judged by his peers. Smith, in career-best form, was an unbackable $1.08 favourite but he was upstaged by West Tigers full-back James Tedesco, who was as surprised as anyone else. “I didn’t think I was any chance,” Tedesco said.  “I thought Cameron Smith had a great year and he has been the best in the game for a while.”

Despite that rogue vote, Smith’s peers are in awe. His closest rival as the best in the business in recent years, Queenslander Jonathan Thurston, was no exception when he said the other day that what made Smith stand out was his ability to find a way to win no matter what. “Whenever I’ve been in his side at representative level, no matter what the scoreboard is, you never feel you’re going to lose,” Thurston said. “It doesn’t matter what the clock or the scoreboard says, you know you’re going to win with him in your side. He is dominating games like I’ve never seen before.”

Smith is 34 but still seems to have unlimited capacity to keep playing at a high level. He has a year left on his contract at Storm but has suggested he might carry on even after that, which would allow him a crack at becoming the first player to reach 400 games, a record that would be unlikely ever to be beaten in such a physically-demanding sport. Thurston, for one, expects him to achieve that. After that, he will stay involved, probably as a coach.

But first things first – for both Smith and Cotchin. One has been here before and knows exactly what to expect, the other hasn’t but won’t die wondering. Premiership captain! It’s always had a great ring to it and even if you have little interest in rugby league or barrack for anyone but the Tigers you surely would not fail to join in the applause for either – or both – of these very fine footballers if they were to achieve it.

RON REED has spent more than 50 years as a sportswriter or sports editor, mainly at The Herald and Herald Sun. He has covered just about every sport a... END_OF_DOCUMENT_TOKEN_TO_BE_REPLACED

RON REED has spent more than 50 years as a sportswriter or sports editor, mainly at The Herald and Herald Sun. He has covered just about every sport a... END_OF_DOCUMENT_TOKEN_TO_BE_REPLACED

PLENTY OF sports have re-invented themselves to rekindle flagging interest, Is it time for golf to follow suit? Guest hound Mark Hayes thinks it is. END_OF_DOCUMENT_TOKEN_TO_BE_REPLACED 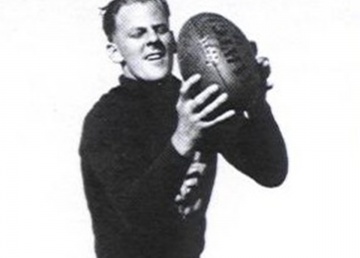