PETER COSTER wrote last week of the notorious Eau Rouge corner at the Belgian GP. On Sunday, he watched as two team-mates drove to the brink of disaster:

AS MARTIN BRUNDLE said as two F1 cars flew towards Formula One’s most famous downhill corner at 300kph, “If one of them lifts, you don’t want him in the team.”

Eau Rouge at Spa is a down-the-mountain and up-the-mountain ride where only the brave can keep the throttle wide open. Suck it up, or lift and lose.

Neither Force India’s Sergio Perez or teammate Esteban Ocon gave each other the narrowest of margins as they rushed towards what could have been a catastrophe on lap 30 of the 44-lap Belgian Grand Prix at Spa Francorchamps on Sunday.

Ocon’s carbon-fibre front wing broke into pieces and Perez’s right rear tyre deflated as they touched, with Perez blamed for squeezing Ocon into the wall past the pits.

An angry Ocon said after the race that Perez tried to “kill” him, but that was an understandable overreaction he later withdrew and Perez apologised for the squeeze that could have sent both cars flying off the drop into Eau Rouge.

It was the second time in the race that Ocon was forced up against the wall by his teammate and came after they collided at the race in Baku in Azerbaijan.

At Spa, both drivers managed to reach the pits. Ocon was able to finish the race in ninth place but Perez was to retire.

Force India chief operating officer Otmar Szafnauer said Ocon and Perez would no longer be able to “race each other” and would be under strict team orders. “We’ll be calling the race from the pit wall,” said Szafnauer.

The near disaster will lead to calls for a change to the terrifying dive and climb that is Eau Rouge. A chicane has been suggested in the past, but this would destroy what led the great Ayrton Senna to say, “This is why I do this.”

Martin Brundle, the voice of Formula One, is a former F1 driver whose own frightening barrel roll and crash at the Albert Park Grand Prix in 1966 I described last week.

Brundle was a hard charger who ran down the pits past me and, to my astonishment and that of the mechanics in pit row, jumped into the Jordan team’s spare car to resume the race.

Brundle was also at Spa in 2011t o see Australia’s Mark Webber pass two-time world champion Fernando Alonso on the rush to Eau Rouge that is more like driving down the face of a cliff. They were centimetres, even millimetres apart but each was confident of the other driver’s supreme skill and bravery. They did not touch.

It was different at Spa on Sunday. But once again Eau Rouge, which translates to the “red water” in the oxide-rich stream that passes underneath, is the thin red line between the elite and the merely competent.

Spa is one of the older and longest circuits on the Grand Prix calendar and to change F1’s most demanding corner would dismay the aficionados.

It is a corner for the purists, who were devastated when the old Monza banking at the Italian circuit was bypassed in the interests of safety.

Cars had flown off the banking and drivers had been killed. Now weeds grow where drivers once risked their lives.

The banking saw its last race at the Monza 1000 kilometres in 1969 and the movie Grand Prix, starring James Garner with appearances by Graham Hill, Phil Hill, Juan Manuel Fangio, Jim Clark, Jochen Rindt and Jack Brabham, has cars racing on what was a wall of death for many drivers. Many of the 52 drivers who have lost their lives at Monza died when their cars flew, off the Monza banking.

No-one wants to see a driver lose his life but drivers are as determined for Eau Rouge to survive at Spa as its tens of thousands of spectators are to see F1 racing at its most sublime.

The Italian Grand Prix is at Monza this Sunday, but without the banking that took so many lives. At Spa last Sunday, Fernando Alonso was racing in a Honda-powered McLaren.

The Spaniard made the shift from Ferrari to McLaren that has seen his talent wasted with an engine that can’t match the speed and tongue of the Mercedes and Ferrari teams, even the Renault-powered Red Bulls driven by Daniel Ricciardo and Max Verstappen.

Danny Ricc, as he was introduced to the crowd by Mark Webber after finishing third behind Lewis Hamilton and Sebastian Vettel, is one to keep the hammer down through Eau Rouge.

Webber made his pass there on Alonso even more memorable than his nine Grand Prix victories before retiring. But not before he became world endurance champion for Porsche.

The Australian congratulated his former teammate Vettel, the bitterness between them following the crash in Turkey in 2010 that led to Webber losing the F1 world championship having passed, just as Webber passed Alonso in that glorious moment through Eau Rouge in 2011.

PETER COSTER is a former editor and foreign correspondent who has covered a range of international sports, including world championship fights and the... END_OF_DOCUMENT_TOKEN_TO_BE_REPLACED

PETER COSTER is a former editor and foreign correspondent who has covered a range of international sports, including world championship fights and the... END_OF_DOCUMENT_TOKEN_TO_BE_REPLACED 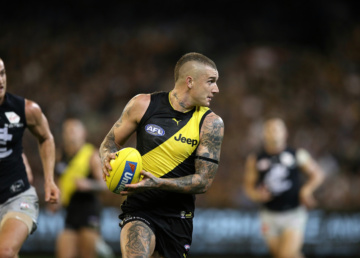 SEVEN DAYS IN SPORT: There is no need to label them heroes for doing their job but AFL players don’t deserve to be heckled as privileged holidaymakers either, says Chief Writer RON REED. END_OF_DOCUMENT_TOKEN_TO_BE_REPLACED

CURLING IS THE last sport you might expect to be rocked by a doping scandal, but not when the Russians are involved, writes RON REED. END_OF_DOCUMENT_TOKEN_TO_BE_REPLACED