SPORTS FANS feared it might be a high-priced fizzer but the fight of the century didn’t disappoint chief writer RON REED.

SO, NO SURPRISES with the big fight, except, perhaps, that the mixed martial arts superstar Conor McGregor proved to be much more of a handful than most people expected. Floyd Mayweather admitted he was no exception to that. “He was a lot better than I thought,” the unbeaten American said after stopping the colourful Irishman with a fierce flurry of blows to the head in the first minute of the 10th round.

So was this a great moment in sport – or, as many thought, a crass travesty with little going for it other than it being possibly the biggest earner for two individuals in the entire history of athletic competition? That depends on the market for it, of course. And the market for this was enormous, even here in Melbourne – perhaps not all that surprisingly in the sports capital of the world. I watched it at the Rosstown pub in Carnegie, a vast establishment with at least five big bars all of which were so packed 30 minutes before the fight was due to begin that they closed the doors. People then peered in through windows from the street. This doesn’t happen on Grand Final day or Melbourne Cup day – does it? – and it certainly can’t be explained by any reference to boxing’s popularity. The sport is generally thought to be pretty much dead on its feet, and while Conor’s speciality – cage fighting, to employ the ugly description its adherents abhor – is thriving overseas and popular here, this also doesn’t qualify as an explanation for the popularity of the event.

So perhaps the operative word is theatre. There was definitely no shortage of that in the long lead-up or on the occasion itself. Trash talking is a compulsory part of all big boxing promotions but even the master of that art-form himself, the late Muhammad Ali, would probably have offered a round of applause for the lurid lengths Mayweather and McGregor went to in beating the drum for weeks in advance. It continued right up to the last minute. McGregor walked – no swaggered, in a comically exaggerated manner — into the venue in an electric blue suit which he was still mostly wearing as his handlers started taping his hands. Mayweather, filmed earlier having his bald head massaged as he snoozed, entered the ring in a balaclava mask to look as threatening as possible. From where I was sitting, it was difficult to determine who was the villain and who was the favourite, although you’d have to suspect that Mayweather’s unsavoury reputation as a one-time wife-beater, big-noter and general smart-arse would count against him no matter how much respect he has accrued through possibly the most stellar ring career of all time.

McGregor? Irishmen in general are pretty popular, as are underdogs in any sporting contest – so he had plenty of support. He talked – and talked – a very good fight but what most people suspected was that, having never entered a boxing ring before and up against such an experienced and formidable opponent, he might fail to deliver what a reported 200 million TV viewers in 180 countries, and those who were paying up to an incredible $150,000 for ringside seats, wanted for their time and money – an entertaining, unpredictable show. Yes, theatre. It would be OK if he managed to land a sucker punch on Mayweather in the first round or two and finish it quickly, because that would be something surprising. But if he were to fall over quickly himself, it would seem like little more than a swindle.

Well, it was nothing of the sort.  Hyped as the fight of the century, it delivered. As was always his obvious game plan, McGregor came out hard, hoping to get it over with quickly. I thought he had the better of all of the first four rounds, without ever looking likely to take full command. But two of the three judges gave him only the first and had Mayweather winning every round from then on. It was closer than that, McGregor landing 51 punches to 40 in the early stages. But Mayweather upped his aggression in the fifth and steadily took control from then on, with McGregor not so much hurt as fatigued, to the point where two judges awarded the ninth against him by an extra point, 10-8. The 10th  — or what there was of it — was a formality, and although McGregor protested that he should have been allowed to continue until he was put on the canvas, the referee called it correctly.

When the fight was stopped, the judges had it 87-83 89-82 and 89-81, which is as decisive as it gets. The statisticians had Mayweather landing 170 punches from 320 attempts to McGregor’s 111 from 430, which is also unarguable even though these numbers are not always a reliable guide – as they weren’t when Jeff Horn beat Manny Pacquaio recently.

Mayweather had played it perfectly, knowing the longer the fight went the more certain it would be that he would triumph. “I guaranteed this fight wouldn’t go the distance,” he said. He also acknowledged that his own sport – as distinct from McGregor’s new-age version of legalised mayhem – was also a winner. For one thing, the last such super-fight, between Mayweather and Manny Pacquaio, had been a lacklustre disappointment. “I think we gave the crowd what they wanted to see – we owed them for the Pacquaio fight,” Mayweather said. Perhaps more importantly, boxing has for some time been under challenge from MMA – in Australia and elsewhere — as the preferred sport for combat fans and some believe a different result here could have had significant consequences. I’m not sure that’s true, but as a boxing fan I’m happy with the result.

You’d probably prefer to have someone more likeable than Mayweather carrying the banner for the sport, but there is no denying that he is one of the all-time greats across the entire sporting spectrum now that he will walk away forevermore with a 50-0 record, the best in history. That’s why people were standing in the street hoping just to get a glimpse of his greatness. Whatever you thought of this event, it won’t be forgotten in a hurry. And McGregor will leave with more respect than he arrived with, whether or not he is ever seen in a ring – as opposed to an octagon – again.

RON REED has spent more than 50 years as a sportswriter or sports editor, mainly at The Herald and Herald Sun. He has covered just about every sport a... END_OF_DOCUMENT_TOKEN_TO_BE_REPLACED

RON REED has spent more than 50 years as a sportswriter or sports editor, mainly at The Herald and Herald Sun. He has covered just about every sport a... END_OF_DOCUMENT_TOKEN_TO_BE_REPLACED 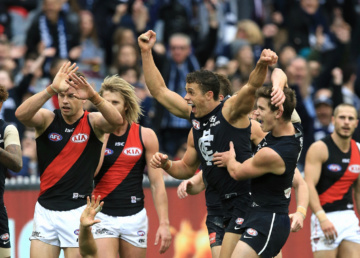 THEY’RE FOOTY’S two most successful clubs – ever – and even though they are on hard times now, Carlton and Essendon have plenty to look back on, says Chief Writer RON REED END_OF_DOCUMENT_TOKEN_TO_BE_REPLACED

A LATE mishap fails to stop Victorian track star from going the distance on the road. ROD NICHOLSON reports END_OF_DOCUMENT_TOKEN_TO_BE_REPLACED

VALE MACCA, MAN FOR ALL SEASONS