Why Grigor Dimitrov, “The Guy with a Black Heart”, can win the US Open

As the one-time boyfriend of Serena Williams and Maria Sharapova (not at the same time), Grigor Dimitrov is now attracting headlines for his on-court expertise. With the US Open starting Monday and with many of the world’s best players either out injured or under a fitness cloud, the Bulgarian’s time could be now. MARK HARDING reports:

GRIGOR DIMITROV, the Bulgarian who was too good for Nick Kyrgios in the final of the Cincinnati Masters 1000 last Sunday, is back to a single digit world ranking for the first time in three years. And there couldn’t be a better time to launch the Grand Slam assault for which many believe he’s been destined.

Dimitrov’s straight sets win in the Cincinnati final, coupled with the last-man-standing nature of next week’s US Open, has put him into the frame as one of the favourites at Flushing Meadows.

The last Grand Slam of the season starts on Monday but has been hit with an unprecedented list of withdrawals and injury concerns.

Three of the four men’s semi-finalists from last year are out for the rest of the season – winner Stan Wawrinka with knee surgery, Novak Djokovic with his chronic elbow injury and Kei Nishikori who became the latest withdrawal last week with a torn tendon in his wrist.

Throw in the serious fitness concerns for Andy Murray with a dodgy hip and Roger Federer with old man’s back, and the prospects of some new blood on the victory dais are strong.

Federer played injured in the final of the Canadian Open two weeks ago and withdrew from the Cincinnati Masters to recover for New York. Murray has not played since his Wimbledon quarter final loss and officially surrendered his world number one ranking on Monday morning when Rafael Nadal regained it for the first time in three years.

Nadal was beaten in the quarter-finals in Cincinnati by Kyrgios but looms as the only player among the “Big Four” or “Big Five” with even a half decent preparation going into the Open.

The other form players look to be seventh seed Dimitrov, whose win over Kyrgios secured his third title of the season, and 20-year-old fourth seed Alexander Zverev, who beat the injured Federer in the Canadian Open the week before, to claim his fifth title of the season.

At 26, Dimitrov is in the prime of his career, and was in command over Kyrgios claiming his first Masters 1000 title without dropping a set and losing only one of his 53 service games for the week.

Back in 2014 he rose to number eight in the world but was considered a less than dedicated player, better known for his romantic exploits than any triumphs on the court.

Former girlfriends include those less than chummy rivals Serena Williams and Maria Sharapova and in the last few years he’s been dating Lewis Hamilton’s ex, the former Pussycat Doll, Nicole Scherzinger. When he was in a two-year relationship with Sharapova, there was plenty of talk that the feud between the two leading female players in the world was linked to their rivalry over Dimitrov’s affection.

But Williams denied it. “If she wants to be with the guy with a black heart, go for it,” she said in a 2013 Rolling Stone interview.

Six-time US Open winner Williams, of course, is currently off the tour awaiting the impending birth of her first child with entrepreneur Alexis Ohanian.

And the player she beat in two of those finals, Victoria Azarenka will also miss the 2017 tournament because a custody battle has prevented her from taking her eight-month-old son out of California to New York.

Last year’s winner Angelique Kerber seems totally out of form, 2011 winner Sam Stosur is out injured and the only other past winners at Flushing Meadows are Sharapova (2006) and Svetlana Kuznetsova (2004).

That leaves Wimbledon winner Garbine Muguruza as the clear cut favourite to take her first US Open.

In the women’s singles final in Cincinnati last week, Muguruza gave a command performance, denying Simona Halep the chance to take the number one world ranking in the process.

The Spaniard completely demolished Halep – instead of allowing her the number one ranking, she allowed her just one game, 6-1, 6-0.

That means Czech Karolina Pliskova will be number one seed at Flushing Meadows, but it’s the number three seed Muguruza who everyone will fear.

Although she is a two-time Grand Slam winner, Muguruza had never won two tournaments in a season until Cincinnati. But at 23, she is in magnificent touch and can be expected to add to that tally before the year is out.

MARK HARDING is one of the most experienced and versatile sportswriters in Australia. He is a former news columnist for The Herald, sports editor for ... END_OF_DOCUMENT_TOKEN_TO_BE_REPLACED

MARK HARDING is one of the most experienced and versatile sportswriters in Australia. He is a former news columnist for The Herald, sports editor for ... END_OF_DOCUMENT_TOKEN_TO_BE_REPLACED

THE doyenne of tennis in Queensland, Daphne Fancutt, is one tough customer. Raised on a remote cattle station, she worked with the men and, when she began playing tennis, she played in the men’s competitions. A feisty competitor on court, she’s been a fighte... END_OF_DOCUMENT_TOKEN_TO_BE_REPLACED 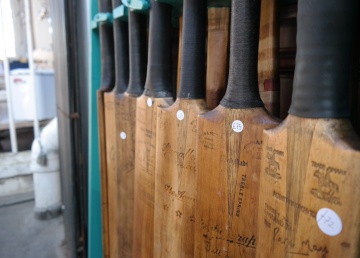 SEVEN DAYS IN SPORT: RON REED raises a glass – of Otago pinot noir, of course – to the New Zealand cricket team, champions of the world. END_OF_DOCUMENT_TOKEN_TO_BE_REPLACED

IF WINNIE THE POOH LIKES GOLF, WHY DON’T YOU?

Time to give it a rest, Novak