The Front Bar gags and the grog flow fast and free

AS RIVALRY hots up for the TV footy shows, TERRY BROWN pours a cold one and watches Mick Molloy and the boys behind The Front Bar:

IF The Front Bar is worried about The Footy Show, you wouldn’t know from the lead-in. Animals Make You Laugh Out Loud has a lot of camels licking kids before it gets worse.

Hoons in a 4WD chase a goat till it can’t run any more, the amusing voice-over guy makes an elephant and dead baby joke, then a hippo has explosive diarrhea towards the camera.

“Don’t call us, we’ll call poo!” says the actual scripted punchline to the steaming pile of programming leading to the hottest TV sports showdown in years.

Perhaps Seven is after the Sam Newman demographic? They’d laugh out loud at all of that.

Whatever the brain-snap, The Front Bar was going to look good by comparison.

The first thing you notice about the program is all the beer. It is also the second thing. The only time there isn’t beer and ads for it on the screen is during the ads, or maybe the punting segment?

Each camera angle has a new and different beer product placement. It might be a good old 26oz Carlton can, or the weather-beaten whiskered dude who ‘allus has one at 11 and looks like it.

I find it irritating watching Andy Maher, Mick Molloy and Sam Pang sip their suds like alcos in a mixed-up drinks order. Blokes like that ruin a shout.

Maher wins in 38 minutes, if there are winners when the beer is bain-maried under studio lights between ads.

With so much beer to show and mention, The Front Bar this week co-opted Pies whiz Peter Daicos to be barman.

The show starts with no fanfare, straight in, mate to mate banter about Rodney Eade being sacked and Gary Ablett missing the announcement with general soreness.

A cruel clip of Gold Coast President Tony Cochrane is found. He appears to have at least 100 volts going through him as he explains the predicament.

“I don’t sit around the board table saying it’s a packet of lollies here,” he somehow gets out.

Probably clearer is that this is where The Front Bar have Sam and Ed and Bec scratching like an eczema workshop.

Seven has the great footy footage both sides of the boundary, an endless supply of torps, drop kicks, changers, hangers, stab passes and every crowd incident the league would like to forget.

They have bits of news, but yeah, nah …

Molloy claims an exclusive, that Dusty Martin has, will, re-sign. A mate of a mate of Dusty’s car repairer was told, quoth Dusty: “Don’t worry, I’m getting a new Jeep next year anyway.”

Pang says Dusty is going to Gold Coast. That comes from his tattooist.

It also pretty much ends the news content, though bits are scattered to form the basis of jokes.

A marching band parades to celebrate Hawthorn missing the finals. It doesn’t work. It belongs on Channel 9, on the Bert Newton Show.

The Front Bar moves, though. If you don’t like a segment, wait 30 seconds. Lines come thick and fast and sharp, some at the same time.

Molloy says he wishes he was like Ben Brown. So he wouldn’t remember the Pies-North game.

Judd comes on to help the panel drink beer. With that gory foot photo from the news up, they discuss the man-eating bay sea lice around where Juddy paddles.

“I’ve got property down there in Brighton and that’s just a flesh wound,” he says defensively.

Good banter. Bar talk without all the sweary bits.

It goes on, but he is Carlton, and not the good Carlton you can drink. I go to hunt some up, strangely thirsty, but there is nothing normal in the fridge. I have a Coopers.

The kids are thirsty too, watching all this nearly-footy. They find a few Watermelon Cruisers.

Daicos is good. Lots of war stories and goals. I cry with joy at the scenes of a near riot in October 1990 I personally helped inflame. Blues fans there for the Judd would be spewing.

The Front Bar has edge, like the Footy Show had.

It hasn’t taken the high ground though. A large, clear picture of Fabulous Phil Carman’s wardrobe malfunction is lowball in any sense you care to imagine.

As a nod to Channel 9, or maybe just because footy, they show Eddie in the Western Bulldogs rooms, staring a long and possibly horrified stare, like he had seen something unimaginably impossible to understand.

That bit is fun. Most of it is.

There is a voxpop, but not the belatedly euthanised Street Talk. Just footy fans talking footy rot.

Staging For Frees could be a winner. The Torp of the Week works.

For an hour show, The Front Bar packs a fair bit in, most of it footy, all trying to milk a laugh, even the serious bits.

Jobe Watson is wished “cheers” in his new life running what he says is “the fourth best brunch spot in Manhattan”.

“I just hope … that cafe is not named the No. 1 brunch spot in Manhattan, and then it’s taken away from him,” Pang gets a late dig in.

Watson still gets off easier than Carman, whose high-kicking style cannot be unseen.

The show runs overtime, as they are designed now to do, and the annoying brass band returns.

It has been a fun night despite them, but Molloy sums up the mood in our bar exactly.

“Well I’m going to go and watch the last half hour of The Footy Show now.”

TERRY BROWN worked for many years as a general reporter, columnist and colour writer at The Sun and Herald Sun. He is now an academic lecturing in jou... END_OF_DOCUMENT_TOKEN_TO_BE_REPLACED

TERRY BROWN worked for many years as a general reporter, columnist and colour writer at The Sun and Herald Sun. He is now an academic lecturing in jou... END_OF_DOCUMENT_TOKEN_TO_BE_REPLACED

With Brownie on board, the boys lift the bar 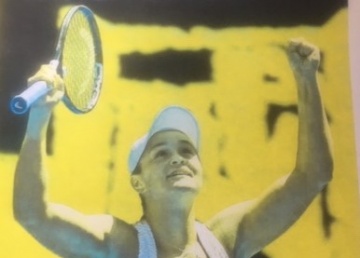 SHE’S a legend in the making and Chief Writer RON REED has been watching it all unfold: END_OF_DOCUMENT_TOKEN_TO_BE_REPLACED

PETER KRIEN wraps up the Aussie women’s challenge at the Lacrosse World Cup WELL, it wasn’t exactly the present Rachel Kirchheimer was hoping for on her birthday when she and her Australian teammates took to the pitch in the bronze medal decider of the Women’s... END_OF_DOCUMENT_TOKEN_TO_BE_REPLACED