Take a tip and watch out for these two Tippies

PROUD father KEN PIESSE goes to watch his daughter play and gets caught up in the excitement of watching two other Tipungwutis:

WHEN YOU ARE a father with a fetish for competition and sports of all sorts, the opportunity to see one of your children competing is truly exhilarating.

Despite regular coaching and coaxing from their Dad, none of our first four children showed much enthusiasm for sports. But then along came Bec.

Our youngest loved footy, attended the cricket and so took to rowing that she represented Canberra at the Junior Olympics.

Now 24, she is playing footy in the AFL women’s competition in Canberra. Given her studies which have regularly taken her overseas, season 2017 is only her third competitive year but she loves it.

She even tolerates my Friday night text messages, hints and suggestions about how she should play the following day.

Home games are in Canberra, so it means I’m only occasionally able to see her play.

She represents the ANU Griffins and in a recent game against Cootamundra, Bec won an award for her efforts playing in the ruck, changing at centre-half forward.

Also on show for ANU in their game against the Cootas — who included seven who had never played footy before — were sisters Tarlina and Angelita Tipungwuti from the Tiwi Islands, whose uncle, Anthony McDonald-Tipungwuti, just happens to be a star at Essendon.

Known as “Tippie”and “Ang”’ the girls played forward and were truly exhilarating, even if the Canberra cold doesn’t agree with them.

Tippie is 24 and Ange 18. Both are naturals, Tippie’s sensational early goal after taking two bounces being rated as the best of the year by coach Alan Reid.

Soon afterwards Tippie centred the ball to the goal square straight into Ange’s arms, who kicked her first ever goal to all-round High Fives, on and off the field

Only the coaches, support staff and a mum or dad or two were present but the standard was good and the girls’ enthusiasm contagious.

There was a wafting breeze going from goal to goal and at quarter time as they broke into their groups, a la the AFL, I was waiting my chance to tell the girls to be prepared to double back as the ball would “float” with the wind.

Tippie looked across at me and said: “Uncle wants to say something” — and everyone burst out laughing.

The Griffs were convincing winners and the girls all sang their victory song in a circle with the enthusiasm of the Big Leaguers.

I’d be amazed if at least one of the two Tippies doesn’t follow her uncle into the big-time.

Seeing their creativity and joy for the game was just wonderful.

Afterwards the girls even allowed me to slip into a team picture. My cup runneth over….

Prominent football and cricket writer Ken “Uncle” Piesse is a life member of the Australian Football Media Association and the author of more than 60 sports books. In time, he hopes he can become known as Bec Piesse’s dad.

KEN PIESSE has covered cricket and football for more than 30 years in Melbourne. He has written, edited and published more than 70 sports books. Signe... END_OF_DOCUMENT_TOKEN_TO_BE_REPLACED

KEN PIESSE has covered cricket and football for more than 30 years in Melbourne. He has written, edited and published more than 70 sports books. Signe... END_OF_DOCUMENT_TOKEN_TO_BE_REPLACED 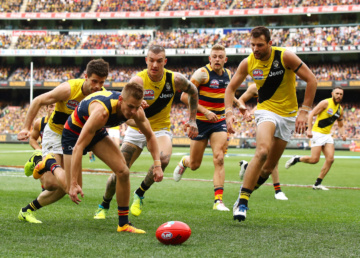 ARE the great moments of football simply distant memories? GEOFF POULTER wonders where the classics have all gone. END_OF_DOCUMENT_TOKEN_TO_BE_REPLACED