As a Melbourne Herald columnist LAWRENCE MONEY introduced an immensely popular segment called Boot in Mouth, featuring the verbal slips of the football commentators. Lou Richards was hurt at first but then grew to love it, even if he kept miscalling its title:

Hey Lawrie, what’s this mouth in boot thing? Aw, give us a break, Lawrie. Anyone can make a mistake….” This poignant plea came ringing across the newsrooms of The Herald and The Sun early in the winter of 1980, the unmistakable foghorn voice of “Louie the Lip” Richards. He had arrived as usual on a Friday to do his Saturday edition match previews for The Sun News-Pictorial and spotted me walking towards my desk at The Herald.

Boot In Mouth was a weekly compendium of footy commentators’ howlers in my daily column in The Herald, In Black and White, and became the most popular segment in my seven-year stint there. 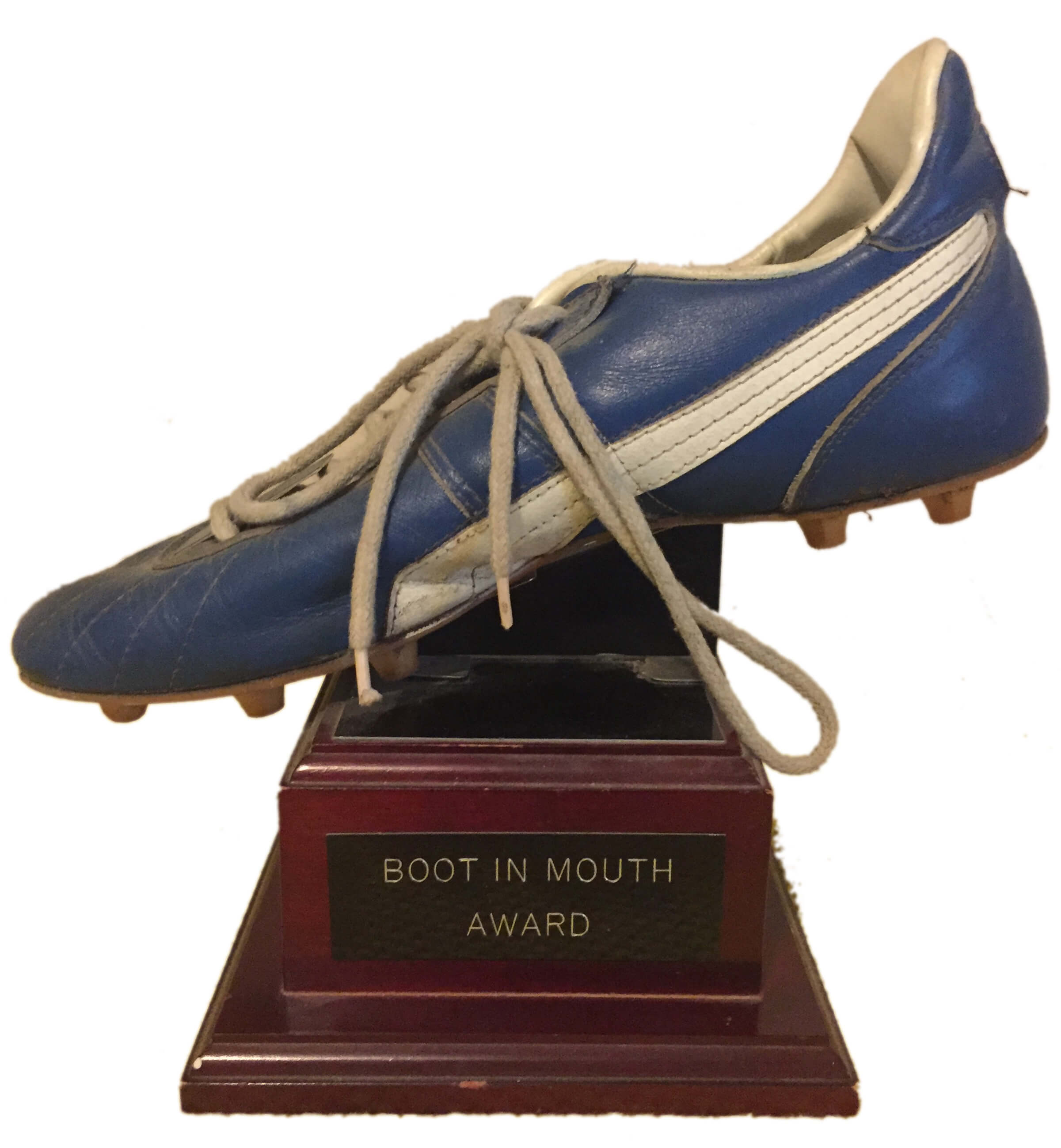 BIM filled a chapter in my first book, The Footy Fan’s Handbook (Sphere Books) in 1981, tripled in size in the 1982 edition then became its own Boot In Mouth book (HWT) when published in 1984 with fabulous cartoons by my good mate George Haddon.

Like the female kitten under the Xmas tree, BIM was the gift that kept on giving. I would publish four or five each Monday and seven or eight would come in from Herald readers. I can’t recall which of Louie’s brilliant BIMs provoked his plea for mercy that day in 1980. He had so many.

Maybe it was: “It’s not a bad sort of a kick but just off-line and through for a goal.”

Or perhaps: “Matthews only needs two or three kicks and he’ll end up with six goals.”

However, I really knew BIM had entrenched itself in Melbourne’s footballing ethos when the very same “Louie the Lip” Richards spotted me across the reporters’ room two years later and called out: “Hey Lawrie, did you catch my mouth in boot at the weekend? I’ve written it down for you…”

By then, BIM was my personal publicity machine. Commentators would often give BIM a mention when they made a blue. “Oops, hope Lawrence Money didn’t hear that.” It was gold.

Mind you, some sportscasters held out longer than others. Graham “Smokey” Dawson on 3LO remained unimpressed for at least three years. “Smokey” felt it was unfair to record his stranger utterances. Statements like: “It’s 10 minutes to two in Geelong as it is in most other parts of Melbourne.”

For a while there, when I visited the 3LO studio to do a weekly humour segment with Mike Schildberger, “Smokey” would give me a hard time. But he’s a top bloke, is “Smokey”, and eventually we puffed the peace pipe.

Regrettably, my transition to gossip columnist, first as Tattler on The Herald in 1987 then to Spy on The Sunday Age in 1989, obliged me to abandon this rich vein of inanity. It was a darned shame because that was the Golden Era of BIM.

All the old champs, so formidable on the field yet so fumble-fingered at the microphone, still ruled the commentary booth.

Of course, as Aussie Rules went national and became more professional, the commentating also grew more polished. In fact, Dennis “Centimetre-perfect” Cometti took it to a veritable art form. However, be assured that, in the heat of battle, the BIMs are still out there.

Lawrence Money has twice been named Victoria's best newspaper columnist by the Melbourne Press Club. He wrote columns for 37 years on the Melbourne He... END_OF_DOCUMENT_TOKEN_TO_BE_REPLACED

Lawrence Money has twice been named Victoria's best newspaper columnist by the Melbourne Press Club. He wrote columns for 37 years on the Melbourne He... END_OF_DOCUMENT_TOKEN_TO_BE_REPLACED

SEVEN DAYS IN SPORT: It wasn’t hard to recognise who might beat the favourite in the Cup, says RON REED as he counts his money. END_OF_DOCUMENT_TOKEN_TO_BE_REPLACED